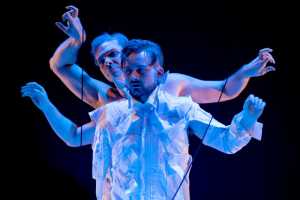 Of all the performing arts, theatre must rank among the most protean due to its extraordinary variety of mood and content: it can stimulate or beguile, intrigue or disconcert, sadden or amuse. On very rare occasions, a play comes along which in the symbiosis of its script and staging defies description – and such is this latest gem from Abrahamse and Meyer Productions.

From opening image to shattering dénouement, the audience is held in thrall, tension sustained by uneasy curiosity as to what will happen next in the oneiric world of a hospital ward in the small hours of the morning.

An abrasive nurse, a comatose patient whose visiting husband represents an increasingly tenuous link with reality, and…how does one characterise a vindictive apparition from the past, an out-of-body spirit hellbent on torture? 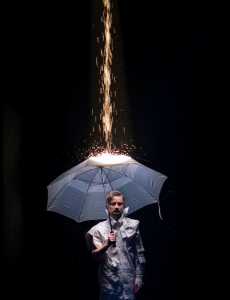 The minimalism of Japanese aesthetics is artfully captured by Meyer and Abrahamse in the spare elegance of the set, the clinical white common to hospitals and wraiths omnipresent. This alabaster uniformity, allied to the calculated stillness imbuing the initial interaction of the personae, makes sporadic outbursts of rage and pain lit with psychedelic vibrancy all the more unnerving.

For sheer ingenuity in marrying the abstract and the visual, this production’s presenters are hard to beat. A fond reminiscence of joy on a boat-ride in the spring of a relationship becomes an instrument of torture more deadly in the suffering it can inflict than any medieval rack; the economy with which basic props and costumes are metamorphosed to carry the plot is admirable, promoted by Bardien’s lighting design and Lingenfelder’s haunting, Bach-accented music.

Marcel Meyer’s versatility is apparent in his dual portrayal of the sinister, laconic nurse grappling with sexual repression and the lushly eloquent Mrs Rakujo as she articulates all the wrath of a woman scorned. 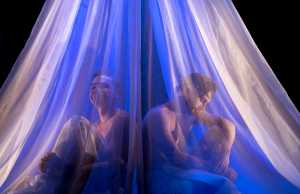 By contrast, Matthew Baldwin provides a nicely calibrated foil for Rakujo’s sound and fury, which director Abrahamse turns to good purpose to realise this two-hander’s potential for engrossing its audience.

From 11th century novel to 21st century drama, The Lady Aoi has lost none of its poignancy or universality.  Another ten centuries hence, its themes of bitterness attendant on unrequited love, obsession, and the curative need for exorcism, will have lost none of their relevance.

The mark of truly great theatre.

What: The Lady Aoi review

Where and when: Artscape from 17 November to 4 December 2021