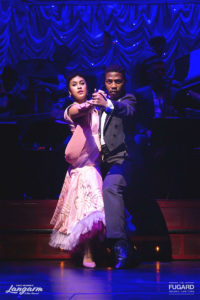 One of the many things David Kramer is so clever at is his ability to draw spirited performances from young cast members. He’s also really good at juxtaposing these with compelling character roles played by more experienced actors. And so it is with Langarm, his latest, (mostly) joyous musical that’s bound to keep the Fugard Theatre booked up this summer.

Set in the 1960s in the fictional Canterbury Hotel in District Six, the story features two star-crossed lovers who aren’t supposed to be together in terms of the newly-minted apartheid laws. They both love dancing – but they can’t partner up across the colour line. There is also a backstory relating to soldiers – and one soldier in particular – who fought for the Cape Coloured Corps in North Africa. Plus a side story concerning the position of the Jewish community in the Western Cape. Oh, and not to mention the social importance of langarm dancing. Which brings us to yet another of David Kramer’s strengths – research.

Crafted though the narrative is, however, it is the effervescence of this entire cast, youth and veterans both, that shines through. There are more than a couple of truly great voices in here, some cute comedic talent, and a flair for the dramatic, when necessary. All of which is pulled through. A fine ensemble, dynamically directed.

But let’s not forget this is essentially a musical show about dancing. And both come out tops. The compositions and the choreography are simply splendid. Musical director Charl-Johan Lingenfelder’s arrangements are wonderfully crafted to suit this medium, delivered with style by the singers and with great skill by the onstage band. Grant van Ster’s choreography, with its langarm-ballroom-vastrap roots and stage musical flair, is eye-catching and exciting. And here one must also congratulate costume designer Widaad Albertus for outfits which perfectly complemented the moves. 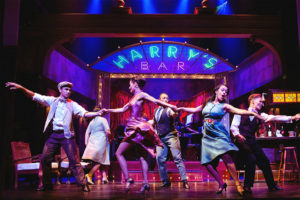 Ultimately, one gets the impression of a skilled team moving smoothly in the same direction. But all teams have their stand-outs, and there were definitely those for me. Elton Landrew was subtly captivating as the charming but poignant Eddie; Kim Louis’ voice was a stunner; Rushney Ferguson and Cameron Botha were a sweet lead couple; and ensemble dancer Byron Klaasen was a ball of fire.

I think it’s fair to say that Langarm is yet another David Kramer success, one in which he pulls the best from his cast and is backed up by a superlative song-and-dance creative duo. It’s looks like a sizzling season ahead!

Where and when: Fugard Theatre until 3 March 2019