The 4th Len van Zyl Conductors’ Competition is an exciting experience for the competitors, with the final round coming up in February. PETA STEWART finds out more: 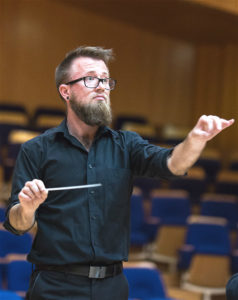 Buzzing with excitement, that’s the way Reghardt Kuhn, one of five young conductors competing in the semi-finals of the 4th Len van Zyl Conductors’ Competition, feels about the  the upcoming semi-final round.  Three will be selected for the final round, which takes place on February 10 2019 at the Cape Town City Hall with the Cape Town Philharmonic Orchestra.

For all, it’s been a valuable experience with personal and professional growth, and they value the advice given to them by Maestro Victor Yampolsky, the doyen of American teachers for the last 40 years, and who has been involved with the competition since its inception in 2010. They also value the camaraderie forged at the competition, making new friends and seeing old ones.

The young soloists are all pianists, the winners of the National Concerto Competition – Louis Nel from Pretoria, and Qden Blaauw and Gerhard Joubert, both from Cape Town.

They will be adjudicated by the panel of jurists headed by Yampolsky, the CPO’s principal conductor Bernhard Gueller, Richard Cock, Brandon Phillips and the CEO of the orchestra, Louis Heyneman. They will then conduct the CPO in rehearsals under the eagle eyes of Yampolsky, who cuts no slack.

Of course all eyes are on the prize – the prestigious title plus a month at the Philadelphia Orchestra and two months with Yampolsky’s Northwestern Orchestra.

Jesse Williams, 25, who entered this year for the first time, says the competition allowed him to push his own personal boundaries. He says: “Listening and taking in every piece of information that Maestro Victor Yampolsky shared not only with me but with the others was an amazing experience. There is so much more to conducting than just knowing your score and leading an ensemble! I can’t wait to see what Maestro has in store for us in the next round. I know it will be tough and challenges but I am ready to tackle them. The standard of the candidates is really high.” 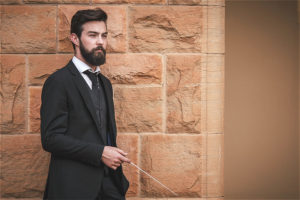 For Andre Oosthuizen, who turns 31 during the competition, the “competition is quite unique. With most competitions you only perform and then the results are posted – no feedback on your performance or a reason why you did not advance. I have learned a great deal from Maestro Yampolsky and the masterclasses during the competition. The Len van Zyl Competition has given us access to a world class teacher – something most of us don’t have access to regularly. I am really looking forward to the next round – the journey in preparation thus far has already been very rewarding. I have made some good friends with the competition.”

Reghardt Kuhn, 27, feels the competition is key in the development of young conductors. “The path of a conductor is often a solitary one, so being able to measure one’s abilities with colleagues around the country is very special,” he says. “Also, the opportunity to learn from these musicians and share knowledge can only ensure the positive development of conductors in the country.  What I have learnt is that less is more. I really like bold and expressive gestures and using the space around me, but I have been shown that keeping my gestures smaller makes them so much more effective and powerful.”

Liam Burden, 30, says: “Being a part of the Len van Zyl Conductors’ Competition is a huge privilege as it not only gives you an opportunity to learn with Maestro Yampolsky and to work with some of the leading musicians in South Africa, but it allows you to be a part of an ever growing community of South African conductors. The successes of past winners and competitors are the motivation to dig deep and give it all we have. I am grateful to be given this wonderful opportunity.”

The works on the programme are the 1st movements of the Schumann and third Prokofiev piano concertos, Gershwin’s Rhapsody in Blue, Otello overture by Dvorak, King Lear by Berlioz and Liszt’s Les Preludes.

The concert is free of charge so no ticket, no jacket required. Just rock up to the City Hall on February 10 and take your seat!