Drag entertainer Lilly Slaptsilli is at her sassiest best in her first stand-up show called I’m Gagging, a camp, comical romp that has been touted as pure escapism. 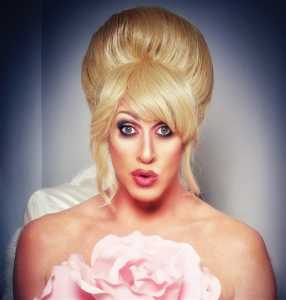 Drenched in irreverence and off-kilter theatrics, the show is currently running at Craft Burger Bar on Buitengracht Street every Wednesday night until October 2019.

The one-hour show is an unrelenting ass-flapping romp that sits somewhere between comedy, theatre and performance art and showcases the svelte Slaptsilli in fine form. The kitschy-comedy-queen-slash-earnest- webcam-model pulls no punches as she gets loose lipped about grown up shenanigans, celeb encounters, Uber drivers and more. According to Craft Burger Bar’s owner, cabaret theatre legend Russell Shapiro, this latest offering by Lilly is packed with dignity-sapping incidents and has a fabulous final twist.

Lilly Slaptsilli aka Clive Allardyce is well known as having been one half of Mince – the other half being Kieron Legacy – the sensational drag duo that performed throughout South Africa for almost twenty years. After years of planning, Lilly, who has always wanted to do stand-up comedy says, “I’ve flipped the script and here I am, following my lifelong dream!”

Clive Allardyce studied fashion design at Cape Technikon and whilst assisting on the 3rd year graduation fashion show, Clive found an instant passion for show choreography and production. This included writing and directing cabarets for Irit Noble and Duck Chowles as well as producing the well-received Rock Circus with a star-studded cast including Wendy Oldfield, Vicky Sampson and Duncan Faure.

In 1995 Clive Allardyce was commissioned by David Kramer to direct a drag show to fill a Sunday night gap over the two-month festive season at the Pump House in the V&A Waterfront. Mince became the working title with the cast made up of made up of two local drag artists.  Partnering with Kieron Legacy Mince was an instant success. The show ran to capacity houses for two years until the venue was sold to Planet Hollywood.

Mince moved to the newly established On Broadway Supper Theatre Club in 1997 owned by Russell Shapiro for an additional 16 years as the in-house act. Mince has performed throughout South Africa working the theatre circuit as well as many gigs abroad. On television, the duo has celebrated appearances on Carte Blanche, Front Row, Top Billing, Entertainment Africa, Die Casper Rasper Show and more.

Lilly appeared on a drag episode of The Weakest Link, and has worked on many local and international TV commercials, even landing a featured role on Deeltitel Dames for Kyknet. 2016 saw Lilly appear in her first one woman show called Shenanigans.

Where and when: Every Wednesday night at Craft Burger Bar on Buitengracht Street until October 2019