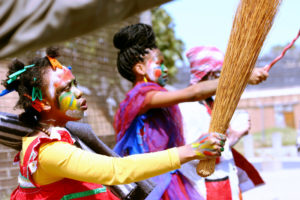 Okwe-Bokhwe (Like/of a goat) is the final performance project of the year for the 2017/2018 Magnet Theatre trainees. It is a part of a broader project – The Gugulethu 7 Project – that looks at notions of performing the archive as one of the imperative elements in remembering collective narratives. When it was first created, it was performed outdoors at the Gugulethu Memorial site, putting the narrative back into the urban townships’ landscape, so as to enter the dialogue of day-to-day conversations. It was conceived as an artistic representation resuscitating and breathing life into the unconscious concrete of community narrative, to give the memorial sites a voice, movement and spirit.

Okwe-Bokhwe, now transferred to Magnet Theatre, is based on the historical records of the Gugulethu Seven. The Gugulethu Seven were seven young men, members of Umkhonto we Size (MK), who were ambushed and heartlessly killed by the South African security forces on the morning of 3 March 1986, during the anti-apartheid struggle years. The Gugulethu Seven memorial was built on the site of the ambush to commemorate the life and death of those activists. 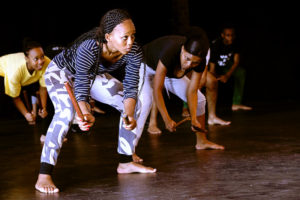 Mandla Mbothwe, one of the Artistic Directors of Magnet Theatre, has created a powerful mourning play, an attempt to engage with a process of healing the pain of our collective past. It draws together the voices and bodies of 21 young performers to celebrate the memory of these seven young men who sacrificed their lives for the struggle.  It is an active memorial; one that brings into focus an important corner of our history that is little known. Showcasing the talent and commitment of the fifth cohort of Magnet trainees, the performance is a search for healing and regeneration, allowing the wounds of our history to be exposed, attended to and validated. 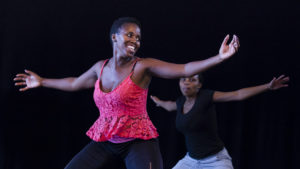 Magnet Theatre is one of South Africa’s best known independent physical theatre companies that has been operating in and outside of South Africa for the past 30 years. Aside from a professional profile, the theatre runs multi-layered educational programmes that are aimed at the transformation of young people’s lives and the theatre industry as a whole.  Magnet Theatre runs the only suite of bridging programs in theatre arts for unemployed youth in the Western Cape. It is housed at The Magnet Theatre in Observatory, Cape Town, a 150-seat theatre. The venue is a training home for youth development projects, a performance space for professional productions and an administrative base for programmes.

Where and when: Magnet Theatre, Observatory from 30 November and 1 December (7pm) and 2 December (12 noon)