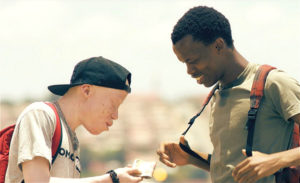 If you want to see a movie that committedly and boldly represents life in one of South Africa’s most invisible townships, and walk out smiling and full of the connection of humanity, then do not miss Matwetwe.

This movie spans a day and night – a particular day, New Year’s Eve of 201 – in Atteridgeville. It follows the paths of Lefa and Papi, two best friends who have just finished school, and their hustle to make money from selling dagga so that Lefa has enough to enrol at Wits university.

Even though Atteridgeville is bleak and desperate, the two bumble their way through the streets, getting into all sorts of trouble, revealing their boyish concerns about girls, their hopes for the future, their pasts and, and some of the strange people who live (and die) alongside them.

Both Sibusiso Khwinana (Lefa) and Tebasto Mashishi (Papi) are extraordinary. Their performances are the most interesting combination of theatrical and natural, giving them an unselfconscious sparkle that makes you fall in love with them both, even though their characters are so completely different. I love their ease with each other, their innocence and charm, their emotional depth and rawness and their physicality. These two are superstars. 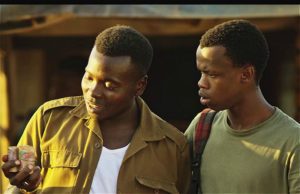 But they are also supported by the most outstanding cast of character actors who lift this movie from being a small-time gangster fliek to a real study of the madness, sadness, hilarity and complexity of a place like Atteridgeville. Each character is a surprise, from the crazy local who pretends to drive a car, to the cute nerdy girl who is in love with Lefa, to the local fruit and veg vendor who sells drugs on the side. I am just mentioning a few. Everyone is a delightful surprise.

My favourite part of the movie though was the chorus. Three locals sit on a stoep and get plastered and tell us the story. This Brechtian theatrical device is unusual in movies and breaks from the naturalist tradition. Here these characters talk directly to us through the camera, reminding us that the story they tell is from their perspective, loaded with their opinions, and they are hilarious, brilliant and irreverent.

And then there is the soundtrack. Every single song is perfect. I want that soundtrack.

This is a brilliant movie. It’s a movie lover’s movie, with sharp editing, great story, interesting characters, amazing performances, gorgeous styling, excellent cinematography and an original director’s eye. Kudos to writer and director Kagiso Lediga. I am glad Matwetwe was my first movie of 2019.

Where and when: Ster-Kinekor cinemas from 25 January 2019