UPDATE: MY OCTOPUS TEACHER HAS JUST WON THE 2021 ACADEMY AWARD FOR BEST DOCUMENTARY FEATURE. THE DOCCIE WAS DIRECTED BY PIPPA EHRLICH AND JAMES REED, AND PRODUCED BY CRAIG FOSTER, WHO IS FEATURED IN THE FILM.

In a time of great divisiveness “nature is a great leveler. When there is love and passion for the wild, that connection grounds all prejudice – race, class, age and gender drop way because one is bound by nature, our ultimate mother,” says Craig Foster.

Foster comes across as reserved, on the verge of shy. He is quietly spoken, cautious with statements, careful with words, private, but open and hard to really know. He is a man whose passions run deep but are governed by science. A man who, when he commits to something he believes in, does so completely and utterly. His love of the natural world is straight and true and his quirky sense of humour is sudden and wonderfully unexpected.

On the edge of no return

Half a century ago, biologist Rachel Carson warned of the man-made ecological disaster that awaited us should we continue the way we were. Her insights were disregarded by many for being both female and allegedly “communist”.

But, “it’s business as usual,” says Foster, filmmaker of My Octopus Teacher, researcher of human origins and co-author of Sea Change. Foster was commenting on our response to the sixth mass extinction climate change crisis. It’s humankind’s denial on finding ourselves on the edge of no return.

Yet there is no place for the blame game in our creation of the crisis. As Foster points out, we are all complicit. We cannot blame corporations or governments. Our profile in this scenario according to him is a creature at extreme risk both psychically and physically. Yet we cannot afford to indulge in the polar opposite of “business as usual” – despair. Despair, is, as he points out, “a luxury none of us can afford. “If you give into despair, you’re finished.”

Our ”secular fall from grace” happened 10,000 years ago when our ancestors, homo sapiens, made the shift from nomadic hunter gatherer – and its return economy paradigm to sedentary crop growing pastoralism and delayed return economy. Our intent was to control nature.

“Millions of years of evolution has prepared the human for the smell of wood smoke, the feel of rain, closeness to human skin, interaction with wild animals, to be nomadic with a group of people “he explains. To move from a paradigm where the wild was your garden in Eden, “where you gathered only what you needed for that day to suddenly fighting against nature was too great a shift in too short a time for human beings without experiencing the deep trauma of being separated from nature”. We have lost touch with who we were designed to be or our “original design” as he terms it.

Trading an immediate return economy for a delayed return economy has birthed both “paranoia and violence”. Anthropologist James Suzman terms our original state “affluence without abundance”. (James was referring to the San Bushmen, describing their wealth of lifestyle, without the abundance of cash wealth), and no one knows why we forfeited Eden for the “apocalyptic hell” of agriculture. Foster has asked every expert he knows, and no one so far, has provided him with a satisfying answer. 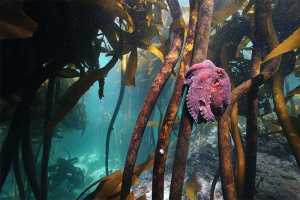 Return to the coast

Foster reached a peak in his own personal separation from nature resulting in adrenal fatigue and weight gain.

This disconnect with nature resulted in him “feeling only partly human”. Recognising this imbalance, and to counteract its outcome, Foster made the decision to return to the tidal and coastal waters of his early infancy and parental home. His mother was diving the day before he was born. He made a commitment to diving daily in the kelp forests close to his home on the Western Cape’s Atlantic coastline which he has been doing for the last eight years. Such is his commitment that should he miss one day, the dive will be made up by two the following day.

Foster doesn’t dive like most divers. He enters the biting cold of the deep Atlantic waters in minimal gear – baggies, goggles and a pair of extra-long, deep sea diving fins. This is not some misplaced act of machismo, but rather from a profound respect for the sea creatures that inhabit the kelp forests. For marine creatures the invasive sounds emitted by divers like the stream of bubbles from aqualungs are equivalent to a noisy shopping mall and they don’t stick around. Interestingly some may find the smell of neoprene or soap off-putting.

The physical and mental benefits of daily diving in frigid water have been extraordinary for Foster. An old Achilles heel injury repaired, bronchial issues disappeared, and he was able to work longer hours without the usual accompaniment of fatigue. The “cold stress triggers“ of icy water are vital for vascular and immune health referencing the evolution of homo sapiens in glacial times.

Foster is able to lower his breathing and heart rate, useful when hanging out with shy sea creatures. He has also adapted the tracking methods of insect sounds and the wind learnt from his time spent with the San to the ocean swell and mollusc tracks of the marine world. Foster is now able to “speak wild language again”, and he is adamant that “any human can”. 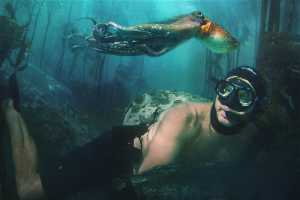 One of the offshoots of his diving is the book Sea Change, co-authored with fellow diver Ross Frylinck. A sumptuous book under the editorship Pippa Ehrlich about the duo’s unique experience of diving in the kelp forests – the marine equivalent of our fynbos biome – and its effect on their personal lives. Sea Change has its roots in Frylinck’s open air photographic sea life exhibition held on the Sea Point promenade seven years ago.

The book is both about a passion for the wild and a “collective expression” of attempting to speak wild language again. It’s a visual and written approximation of the immersive experience in the trippy, transcendent magical marine forests. It includes interactions with an octopus, wild otter, and being hovered over by the wings of a ray as wide as a car and the venom of a puff adder. Readers will be charmed, intrigued and in awe of the jewel like photographs and gobble up fascinating bits of information around species.

The book explains the various stages of Foster’s diving experience. First there is the falling in love with the kelp forest and the experience of what Foster terms “primal joy”. Foster experienced the  lives of the sea creatures as “more extraordinary than the wildest science fiction”. Hard on the heels of primal joy is the rising of the shadow side which carries the devastating realisation that “you are part of the demise of this incredible natural word”. Foster experienced this as a “dismembering process”. Here “in the face of this incredible, natural splendor” you “have to confront many of your demons”.

Foster describes how each dive was watched by thousands of animals. Blame becomes irrelevant “when you look into the eyes of those animals” and recognise that “ they don’t care about the government or corporations”. Foster explains that “you are looking at yourself and the blood you have on your own hands”. The identification of your complicity “forces you to try and do something – it is not easy.”

After years of diving daily “nature somehow becomes this extraordinary mirror for your own fractured psyche” or what Foster terms “natures mirror”. Foster has seen the phenomena operate time and time again when taking groups diving in the kelp forests. It’s uncanny he points out how the environment will mirror what the individuals in the group are feeling. It’s a process  that makes one very vulnerable. It “takes you up and then takes you down“.

When he looked at natures mirror he saw himself as an incredibly, clever idiot. For Foster working with natures mirror can be a very painful process particularly as it carries the realisation of what has happened on a species level. But there is a very beautiful aspect in acknowledging how profoundly close humans are to nature. With each dive his healing deepened.

Foster points out that currently communities take what they can to survive. He explains that it’s very difficult for them to give any thought to future generations when they have been stripped of ownership and wealth and their current survival is at stake.

For many of the top global captains of industry a safari or time spent at the coast is the highlight of their year. Against the background of “every breath you take, every mouth full of food is derived from the wild” Foster posits the following question in his conversations with them. When you do all your business deals how much are you factoring in nature?  The inevitable answer is a sheepish – none. This attitude is a perfect illustration of the glitch and deep disjunct indicative of humankind’s profound separation from the natural world and at the same time a deep longing for it.

Given a chance, nature recovers

It’s not surprising that Foster’s heroes are those who form our “incredible ancestry”. Those who were “part of the natural world” and “inseparable from the wild”. “For all our technology they make us look profoundly primitive with their sophistication” states Foster. “They lived the greatest lives that anyone has lived. If I can just attain a tiny bit of their knowledge I’d be happy. We are in nursery school compared to them,” he says.

The efficacy of outreach is very important to him. He believes in connecting young African people to nature in a “deep way” so they will become its guardians. Currently he is working with a group of young African marine biologists. He believes that these guardians of the marine world “are going to be far more effective than myself or my generation in regenerating this space.” Given a chance, nature recovers.

Future projects include establishing Wonder of the World status for the great African sea forests of the Western Cape in which Foster dives and so placing them on equal footing with other great natural places on earth like the Amazon Rain Forest, The Great Barrier Reef and Serengeti.

What: My Octopus Teacher Netflix
Where: On Netflix
Link: https://seachangeproject.com/
WS