The acclaimed play At Her Feet by award-winning writer and director Nadia Davids and performed by Quanita Adams, returns to the Baxter for the first time in 14 years, from 22 November to 8 December 2018. 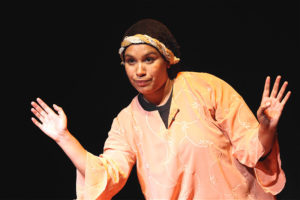 This is last time that Adams will perform the work, making this an unmissable chance to see the powerful, landmark production in its original form.

Written in 2002, At Her Feet evokes the experiences of four Muslim women in Cape Town whose lives are touched by the events of 9/11 and by the honour killing of a Jordanian girl. These women – a secular student, a tough-talking auntie, a Che Guevara-worshiping slam poetess, a recently married religious travel agent – narrate their lives, offering vivid, affecting, bitingly funny, deeply moving stories that speak to race, love, faith and belonging. Through monologue, song, and poetry, they offer the audience an intimate glimpse of their world.

“At Her Feet was born in and out of a moment of global chaos, in those turbulent months after the terrible attacks on New York City and in the horror of the build-up to the invasion of Iraq,” explains Nadia Davids. “I wrote the play as a response to the ways in which Muslim women were being portrayed in the media and the ways their bodies were being turned into ideological battlegrounds. I wanted to make a piece of art that reflected my experience of growing up Muslim in Cape Town – the ordinariness of it, the love, the joys, the difficulties, the complexities and to write about the women I knew. None of whom were being reflected in these veiled, mysterious figures who were suddenly everywhere, all the time. Quanita and I had known each other since high-school, we’d met up again at university and we knew, instinctively, that this was a work we wanted to make together.”

From its first staging as a student production at UCT’s Arena Theatre the play has earned glowing reviews and has described as ‘brilliant’, ‘triumphant’, ‘unforgettable’ ‘timely’ and ‘a production that will touch you, shift you and never really leave you’.

Winner of two Fleur du Cap awards (for Best New Director and Best Actress), nominated for a Noma and a Naledi, At Her Feet has travelled throughout Southern Africa and has been staged in New York, London and Holland. Davids and Adams believe that the play, written about Cape Town and for Capetonians, will always, at its deepest level, belong to its home-town.

Nadia Davids made a return to South African theatre last year with her new work, What Remains, directed by Jay Pather. The play, telling the story of the unexpected uncovering of a slave burial ground in Cape Town, debuted at the National Arts Festival and went on to scoop seven 2017 Fleur du Cap nominations and win five, including Best New Script, Best Director, Best Ensemble and Best Actress. Davids is currently an Associate Professor at UCT’s English Department.

Adams has recently transitioned from working fulltime as an actor into writing for television. The success of her first show, Vinkel & Koljander has led to a new series currently in the making, The Riviera, based on her own childhood in Lotus River.

At Her Feet is studied at a wide range of South African, British and American school and universities; it is understood as one of the most important theatrical works to emerge around Islamophobia, Muslim women and Islamic Feminism post 9/11 and is considered one of South Africa’s most significant post-apartheid works.

What: At Her Feet

Where and when: Baxter Golden Arrow Studio from 22 November to 8 December 2018