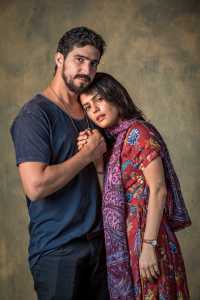 The telenovela Orphans of a Nation is a love story set in the current context of refugees and immigrants from around the world. The production, from Emmy Award winners Thelma Guedes and Duca Rachid, starts at 6.30pm on 5 April 2021 on SABC 3.

“Orphans of a Nation won an Emmy for best telenovela in 2020 – the story begins in war torn Syria and follows characters as they flee as refugees to Brazil. The telenovela has a great big love story at the centre of it but it also manages to place the drama in the real world of our time. It awakes in us a sense of our connections as a country to the plight of our own refugees in South Africa that too have their love stories and pain from fleeing their native lands,” explains Pat van Heerden: Channel Head SABC 3 Bouquet on why the channel acquired the show.

A love story with a difference

Several cultures, beliefs, dreams, accents and only one nation: Brazil. Surprised by passion and fleeing a nation at war, Laila (Julia Dalavia) and Jamil (Renato Góes) arrive in the country to try to live the love that united them while they were still in the Middle East. She is a Syrian refugee. He is an employee of the powerful Sheik Aziz Abdallah (Herson Capri), who forcedly took Laila as one of his wives.

The background of this love story is the universe of people from many places in the world – war refugees – escaping political or religious persecution or resettled for economic reasons or natural disasters. Orphans of a Nation shows that these people arrived, arrive and will continue arriving in Brazil, a country whose tradition is to welcome and peacefully coexist with differences, in order to restart their lives. Despite their difficulties, they bring their cultural heritage which has enriched and become part of the Brazilian nation.

What: Orphans of a Nation