The world’s premier theatrical ice skating company, The Imperial Ice Stars, returns to South Africa with a brand-new show – Peter Pan On Ice. It will run at Artscape from 15 January to 2 February 2020. 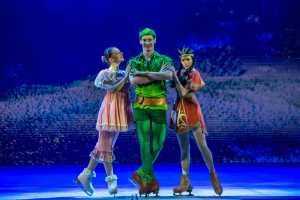 This classic tale of magic and make-believe, spectacularly staged on real ice, features Peter – the boy who never grows up – as he and Tinker Bell whisk Wendy and her brothers from their London home off on a magical journey to Neverland. Watch as they enjoy thrilling adventures with the Lost Boys, Tiger Lily and the Mermaids, encountering the evil Captain Hook, his pirates and a very hungry crocodile!

Since their debut in 2004, the Imperial Ice Stars have enthralled more than four million people in 27 countries across five continents, and have performed at some of the world’s most prestigious venues, including the London Palladium and three seasons at the Royal Albert Hall.  The award-winning troupe has built a worldwide following and established an unrivalled reputation for pushing the boundaries of contemporary ice dance in their sophisticated portrayals of classic works. Previous world tours (Sleeping Beauty on Ice, Swan Lake on Ice, Cinderella on Ice and The Nutcracker on Ice) have been greeted with nightly standing ovations and five-star reviews.

The popular troupe last visited South Africa in 2017 with Cinderella on Ice.

What: Peter Pan on Ice