A Howl in Makhanda is a new, original, semi-autobiographical play by award-winning director and current EPWP intern Qondiswa James. 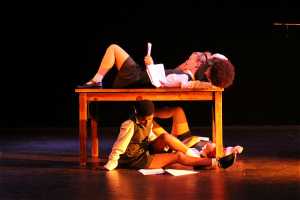 Shortlisted for the CASA award for woman-identified playwrights 2018, A Howl in Makhanda is a semi-autobiographical work about two black and two white South African teenagers at an elite all girls boarding school who break the rules and how the disciplinary board deals with each of them differently. Xoli, Bawdy, Sam and Karla are a group of grade 11 girls who attend the Diocesan School for Girls (DSG), Makhanda. DSG has recently built a wall around itself with an electric fence to keep the outside out and the inside in. The girls roil and suffocate inside. The play explores the following themes: high school pregnancy, racism and sexism, peer pressure, religion, family, loyalty, freedom and identity.

Using passages from Sylvia Plath, Kurt Cobain and Allen Ginsberg, the play archives the struggle and resistance of the girlchild and brings visibility especially to the racialised issues of young black girlhoods by interrogating the undesirability – or the inherent delinquency or criminality – of the black femme body. 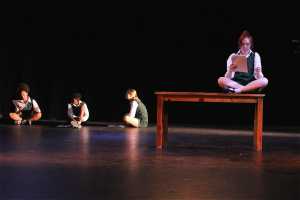 “A civilian in the world”

Qondiswa James is a stage and film actress, writer, director, theatre maker and activist and a recipient of the Theatre Arts Admin Collective Emerging Theatre Directors Bursary in 2018 which resulted in the production A Faint Patch of Light, which won an Ovation Award at the 2019 National Arts Festival. Qondiswa was nominated for Best New Director and Best Performance by an Actress in a Play for that production in the 2019 Distell Fleur du Cap Awards.

“I want to push myself as an ethical being located in a particular narrative, which is that I am black, queer femme, Xhosa, rural, all of these things but that I cannot, even as an artist, divorce myself from being a civilian in the world,” says director Qondiswa James, “a person trying to exist ethically in community and using my practice and the tools that I’ve been gifted to communicate with others in this community.”

Sound design for A Howl in Makhanda is by Jannous Aukema, lighting design by Themba Stewart and movement choreographed by the cast. The cast features Kim Adonis, Yamkela Ntendiyo, Amé Strydom, Megan Theron and Zukisani Nongogo.

The EPWP Script Development Project at Magnet aims to encourage the development of new plays and provide support and access for emerging theatre-practitioner interns who might not otherwise have an opportunity to create new work. The project also acts as a bridge for young theatremakers into the theatre industry by providing mentorship from established practitioners and a venue for the production.

What: A Howl in Makhanda