Phinda Ubuyele is the latest theatrical offering from award-winning theatre-maker Thembela Madliki. Madliki’s work at the National Arts Festival 2022 has included a number of productions, such as Nyanga (2016), Bayephi (2017) which won a Standard Bank Silver Ovation Award; Well Worn Theatre’s Galela (2018); and Where She Walked (2019).

Phinda Ubuyele is a two-hander that follows the story of siblings who have returned to their childhood home in the aftermath of their parents’ death.

The production deals with generational trauma, regression, and survivor’s guilt. The complicated relationship with time and memory is juxtaposed with the guilt each child/adult carries about their role in the demise of their family unit. 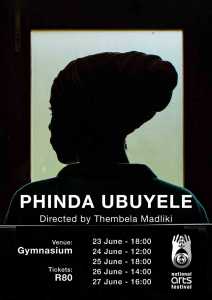 The siblings are engaged in recounting their childhood experiences to draw a deeper understanding of who they are as adults.

They spent their childhood under the surveillance of an abusive father and an ailing mother, and as adults they are each other’s refuge as they begin to remember the events of their past to uncover the hidden narratives of their own lives.

These duo must examine the traumas of their past, which often cause them to revert to earlier stages of their development as a defense mechanism.

Dates at the Gymnasium