The eminent cellist Raphael Wallfisch will perform with the Cape Town Philharmonic and for the Concert Series in a coup for Cape Town, writes PETA STEWART 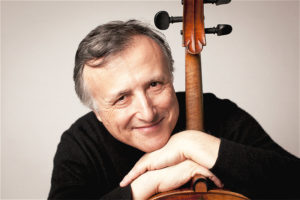 Violin? Mildly interesting. Piano? The same.  The cello?  That stuck, says Raphael Wallfisch, the eminent cellist performing Dvorak with the Cape Town Philharmonic on Thursday, 15 November 2018, and a celebrity recital for the Concert Series on Saturday, 17 November 2018. Coming from a musical family as he did, Wallfisch was spoiled for choice. His mother is Anita Lasker, once a revered cellist and now a revered orator about the Holocaust; his father the pianist Peter Wallfisch.

He played duos with his father who he says was a very special musician. “I was surrounded by music, literally and physically, and to keep me quiet as a baby they put me under the piano!  When I was a fellow professional, my father and I did many recitals which were broadcast and we travelled a lot together,” he says.

All in the family

Because both Raphael Wallfisch and his wife, the Baroque violinist Elizabeth Wallfisch, have huge careers (although she has scaled her down in favour of an alternative career as an exercise specialist for stroke victims, for instance) they had quite a hectic family life.

“Now that we have three grandchildren I look at them and realise there was so much that flashed past without my taking it in in the upbringing of my own children,” he says.

All three are, almost naturally, musicians and have played together with their parents. In fact, in 2020 the whole family will perform at various times in the famed Stratford Festival in Ontario, Canada – that’s Raphael and Elizabeth, composer/conductor Ben, opera/lieder singer, cellist and comedian Simon, and singer/song writer, Joanna.

It was when Wallfisch was 14 that he realised the cello was going to be his life.

“One day my mother, who was also working for the BBC, dropped in to the BBC Symphony Orchestra and saw that the Brahms Double Concerto was being played that night. She decided on a whim to take- changing experience for me. I had had good teachers till then and I was working at the cello but I also had another passion, in the theatre. However, the cello won,” he says.

It soon became obvious in the education syllabus of the time that there would not be enough time to practice the cello so he dropped out of school and went to Rome where he had to learn Italian along with the cello … “a better education than many of my age, 16, received !”

He returned to London and was accepted by the Royal Academy and started building what has become one of the most illustrious careers of any cellist.

Later, in America he studied with the great Russian cellist Gregor Piatigorsky and at his house got to know and performed with Jascha Heifetz.

“It doesn’t get much better than that,” he says. “The next stop is God!”

Every performance is a challenge

Raphael Wallfisch believes that building on music is the best thing one can do. “Every performance is a challenge whether it is for 20 people in some remote location or the thousands in the Royal Albert Hall. Every time is special and I value the fact that I have been able, at the London Proms, to perform unusual repertoire which I have championed over the years,” he says.

What’s next? Well, apart from waiting for his grandchildren to grow so he can make more music with them (he already has a great musical connection with the four-year-old, Alma, who lives in London in the street behind and shows great interest in many instruments), he is going to go to Israel and rehearse with his trio in preparation for more chamber concerts and tours coming up including all the Beethoven Trios in 2020 at the Wigmore Hall for the 250th anniversary of Beethoven’s birth.

These are not Wallfisch’s first concerts in Cape Town. He played, also with Albie van Schalkwyk, for the Cape Town Concert Series in the mid-1990s and with the Johannesburg and Durban orchestras. As luck would have it, dates didn’t work then with the CPO and didn’t work now in Johannesburg  and Durban, so Cape Town is lucky to hear him in both recital and concert.

Wallfisch does have a connection with Cape Town. His wife is a granddaughter of Albert Coates and is busy doing some research into him. Tamara, Raphael’s mother-in-law remembered times on Lake Como with him, a place where he entertained the greats like Uncle Arturo (Toscanini) or George Bernard Shaw. Coates was principal conductor of the London Symphony before he came to live in Cape Town, following his second wife Vera de Villiers.

“We have Coates’s baton. Tamara gave it to Charles Mackerras, who gave it to our son, Ben. It’s truly passing the baton!”

Wallfisch has also recently completed the fifth CD in a series he curated on Jewish composers for the German label, CPO.

“One of my greatest pleasures has been in bringing back to life some lesser known works for cello and orchestra. While Dvorak and Elgar are wonderful to play, they don’t need so much exposure. I have been very lucky in my career. I was able to make a huge number of recordings in the days when the BBC required studio recordings and I was able to develop my interest in lesser known repertoire, one of which was a lost sonata of Zemlinsky, which we found in my father’s collection of scores! I was also able to commission many pieces from some of the finest contemporary composers,” he says.