Gruesome Playground Injuries is like watching an accident in slow motion. You think you know what’s coming, it’s pretty disgusting, you can’t stop looking and you are fascinated and repulsed. It’s a tough 80 minutes but it is entirely, obsessively engaging. 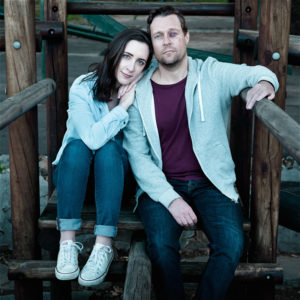 A simple set, with storage boxes that are moved and stacked and separated with intention. Two clothing rail corners with clothes for each character. Effective lights and fantastic music. A simple series of title slides letting us know how old the characters will be in the following scene, and what the injury is. Tara Notcutt is in her element making and filling the space for this play.

Two characters, Kayleen and Doug are children when we first meet them. I hate adults playing children. I had to get over myself and I did. I was helped by Candice Bernstein who played little Kayleen with a frowning seriousness and straight-lined physicality that was unusual and believable. I completely recognised Matt Newman’s slightly more uncontained Doug. He was my boyfriend from Standard 4, who died in a car accident the year after we finished high school. Without knowing how, I was suddenly, deeply in the world of this play and these two characters.

The scenes (and injuries) are not chronological. We go backwards and forwards in these two characters’ lives and are exposed to their external, internal hurts, both accidental, self-inflicted, familial and caused by each other. Kayleen becomes hard and uncommunicative, and fucked up and complicated. Doug becomes idiotic and desperate and accident prone. Candice and Matt get better and better at playing them. I hated both characters, and I loved them too. I hated what they said and did; their overbearing self-absorbed indulgence, their repetition, their inabilities. I loved how familiar they were and how inevitable their friendship was.

Matt and Candice give convincing, heartfelt and sensitive performances. This text is not easy to speak, play, or to watch. And I sat there, wanting to shake them, wanting to shout at them to get a move on, to be more interesting, more open, more powerfully in this world. But they weren’t. And I understood. And it is heart breaking.

The Alexander Bar Theatre is the only place I can think of where this kind of work can happen in Cape Town. I am so grateful it does. PS. There are only a few nights of GPI left.

Where and when: Alexander Bar Theatre until 17 November 2017