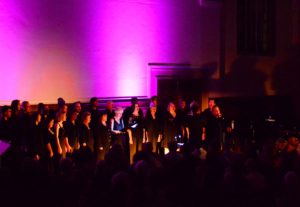 Silence, by definition, is the absence of sound. Vox is Latin for voice. How then can silence and voice be mutually compatible when singing group Vox present a contemporary choral extravaganza titled Trust the Silences (Once More) at Memorial Chapel, Bishops on 21 April at 8pm?

To that, Vox founder and director Dr John Woodland replied “the silence we hear is the space, the rests, the tacit bars, between American composer Eric Whitacre’s lush harmonies and shimmering chords and those juxtaposed with Latvian composer Eriks Esenvalds’ ethereal sounds and hypnotic soundscapes from our alternative groups. That silence means stop, stand still, breath, don’t rush to the next phrase.”

Said Hans van Heukelum, director of Unique Destinations who attended the first 2016 Vox performance, “silence comes in different forms. There is the absolute silence of the Arctic where quietness drowns out all noise. There is the silence when listening to a renowned lecturer lecture. Or there is the silence when listening to beautifully sung music when no extraneous sound malignantly intrudes into a rich aural experience. Where for a second or two time stands still while performers, and ourselves, quietly breathe.”

A re-imagining of their first recital

Under Woodland’s direction, Trust the Silences (Once More) is a re-imagining of their first contemporary choral recital which took place in the Memorial Chapel, Bishop’s last November. 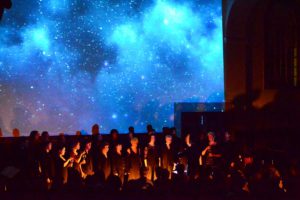 Headed by the “unleashed” kinetic energy of Whitacre’s Cloudburst – a musical depiction of a thunderstorm, replete with percussion instruments, clicking, tapping and clapping by singers portraying torrential rain, other Whitacre works include This Marriage – a reflection on marriage; The Seal Lullaby to text by Rudyard Kipling, composed for a never released animated film, and Fly to Paradise from Whitacre’s techno-opera Paradise Lost.

Said Woodland “ranging from the sublime to the intimate, these works offset the minimalist masterpiece at the centre of the performance When David Heard. This is based on the Bible’s single sentence describing the moment David discovers his son Absalom has died in battle.

Over and above the 25 strong Vox choir other artistes are Bronwyn van Wieringen (piano) Dylan Tabisher, Cherilee Adams (percussion) and Tara Notcutt (lighting and technical direction).

However, the music alone doesn’t make Trust the Silences (Once More) unique. What does is how Woodland sets up the chapel. Seating is reorganised to encircle the performers. In a similar (but not the same) way to a Son et Lumiere, Notcutt’s lighting effects link artistes, creating a powerful all embracing aural, visual canvas.

Van Heukelum summed up his first Trust the Silence experience as, “a mind massage of masterful sound – such delicious clarity of notes that resonated with every fibre of attention. I have never emerged so relaxed from a sound box. John (Woodland) created a sound scene like an opera without intrusions.”