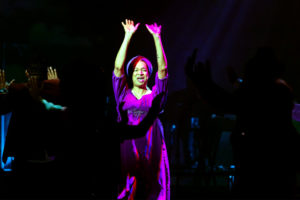 I wish I had an aunty like Merle. You know, the kind of woman who knows exactly what’s going down in her ‘hood, who always has the best skinner, who’s ever ready with a cup of tea and maybe some lemon merang-gway,  and who fights fiercely for her family and friends. Also, who happens to be a six-foot man with the most famous ‘fro in Cape Town.

Because while we may indeed have aunties who are sort of like Merle, there is only one Marc Lottering, and his version of the ubiquitous aunty that we all know and love/fear/admire is anything but commonplace. His Aunty Merle Abrahams from Belgravia Road, Athlone is saucy, funny, a bit bitchy, a lot feisty and a tad campy. She’ll pass judgement on the quality of a koesiste, assert herself with a Bantry Bay kugel, and accuse a media manager of CV-cooking; and then she’ll turn around and accept her son’s sexual orientation and help her long-standing helper. All in a morning’s work. And all while sashaying on stork-like legs in stylish heels.

Much-loved comedian Marc Lottering’s popular character Aunty Merle morphed into being some two decades ago, and has been popping up in his solo performances on a fairly regular basis ever since. But she’s never had her own show. Until now – and she’s decided to go large. Aunty Merle The Musical is a big scale production with 14 actors, an eight-piece band and 21 original songs. It has an ambitious script that covers a lot of angles, from a manipulative ex-boyfriend to an angry young student, from star-crossed lovers to cheating husbands and more; not to mention the race, class and gender issues that carpet this musical comedy. And it’s quite long – three hours in total. That’s seriously going large. 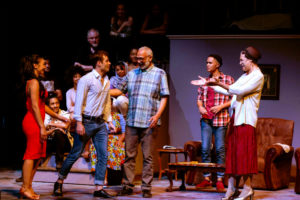 And Marc Lottering, together with his fabulously talented team, pull it off.  There’s just the right balance between music, movement and drama; the songs alternate swiftly between soulful ballads and kick-ass choruses; the choreography is slick; and the actors are in a class of their own. This is a Cape Town musical with an international punch, a debut production that astonishes with its assuredness. Then again, why shouldn’t it, taken the calibre of most of the team involved?

The storyline begins when Aunty Merle’s daughter Abigail becomes engaged to get married. This means bringing two families together – one living in Athlone, the other in Bantry Bay. Meanwhile, Aunty Merle’s longtime helper, Lydia, is having problems with her husband and her daughter Nambitha, who has just returned from studying in the UK.

Upstairs, Aunty Merle’s son Carl is preparing to come out of the closet. Down the road, Abigail and her fiancé Alan’s best friends Jakes and Liezel have mixed reactions to the upcoming wedding. And Abigail’s former partner, Denver, is definitely not happy with the situation. Will the families pull together? Can Lydia solve her familial crisis? What is Carl going to do about his best friend Siya? And can Alan’s Dad learn how to say “sam-ooosa” instead of “sam-ohsa”?

This being a musical, it’s all resolved through song and dance and ends with a great ensemble finale. In between is where the deliciousness lies. With Daniel Richards and his ridiculously buffed torso; with Roberto Kyle and his adorable crush; with Tankiso Mamabolo and her gutsy spunk; yoga-toned Kate Normington; sensually mean Loukmaan Adams; squeaky clean Stephen Jubber – oh, the whole damn cast. Headed up by a svelte Lottering, who lurches across the stage with intent and somehow makes us acknowledge both himself and the character he is playing, with equal affection. He’s done himself, Aunty Merle and the production proud. 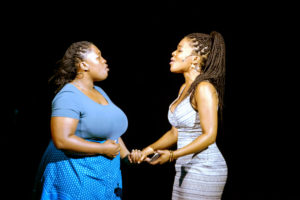 Special mention must also be made of Tarryn Lamb’s substantial contribution to the music and lyrics, writing 12 of the 21 songs, amongst them a number of show-stoppers like Every Story Needs a Baddie, the moving I Stopped Dreaming Long Ago and the sweet Thank God They’re Getting Married.

As a composer/writer, she really has an excellent grasp of the mechanics and emotions of the musical genre.

And then, of course, there’s director Lara Foot holding it all together, putting her unmistakable stamp of authority – which means quality – on a production that is so joyously Capetonian, so professionally global, and so festively fun. For three hours at the Baxter Theatre you too can have an aunty like Merle – and she’s worth every minute.