Ever wonder what goes on behind the scenes when you’re sitting in an aeroplane? Are those friendly smiles on the faces of the flight attendants for real? Do they actually not mind bringing you your fifth beer, and stashing your smelly shoes in the overhead locker?

We’ll let you in on a little secret; we’ve had a peek, and it’s full of surprises. Put it this way – you may behave a little differently once you’ve seen what happens on the other side. Thanks to Cathy and the Trolley Dollies, flying will never seem quite the same. 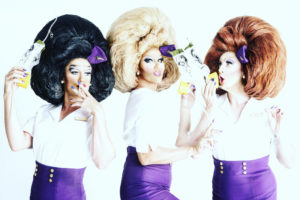 A twice-weekly fixture at the plush Gate 69 dinner theatre, Cathy Specific and her two sidekicks are, as the name suggests, flight attendants. But not just any flight attendants. They’re eight foot tall, mega-bouffanted, amazon attendants. Who like to sing. And share their thoughts and feelings about being trolley dollies in the 21st century. Yes, you could call it a drag show. But it’s one with mega attitude. At altitude.

And then there were three

Ms Specific (Brendan van Rhyn) is probably the best known of the trio, having been around for nearly a decade. The character was born out of Van Rhyn’s real-life experiences as an air steward, and has been a firm favourite on the theatre and corporate circuit. This time around she’s brought two friends with her, snake-eyed Holly (Christopher Dudgeon) and ditzy Molly (Rudi Jansen). The group was born out of a routine on the Madame Zingara tour, and now has its own home at Gate 69.

What makes the venue a tad different is that Van Rhyn and Dudgeon are actually co-owners of Gate 69, and together with Jansen they act as hosts before and after the show – literally pouring wine, serving snacks and making sure their guests are okay. Which is fabulous and also slightly unnerving, taken that all three tend to tower over the average person. But they’re all so sweet that it’s not that scary. Really.

Once they’re on stage (and an extra foot or so in height is added with the addition of wigs that look like they’re on steroids), the service ends and the show begins. The three bitch about pilots, passengers and pick-ups, trading nasty-funny lines with ease and sashaying into song when they please. The repertoire ranges from clever reworkings of classics like the Andrews Sisters’ Boogie Woogie Bugle Boy to a salacious reading of Bette Midler’s Long John Blues to a poignant treatment of Maybe This Time from Cabaret. 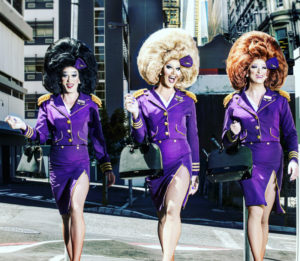 It’s all very slick and sassy; coupled with the ritzy setting it makes for a classy night of fun and fabulosity. If there was a quibble it would be that the pace of the repartee could be a bit swifter; it would make for more effective punchlines. But this aside, it’s clear that the gals and the audience are lovin’ it, and that’s what counts.

And we guarantee you’ll look at the cabin attendants in a different light, next time you fly.

What: Cathy and the Trolley Dollies

Where and when: Gate 69, 87 Bree Street (corner Bree and 79 Hout Street), every Wednesday and Thursday evening until end June.

Tickets: Tickets cost R550 per person which includes a mezze platter, hot soup and bread service and dessert. Drinks are not included in the price. Dress code is fabulous – Cathy will absolutely not tolerate short and slops! PG16