Attraction to or attraction for someone or something isn’t in itself amoral. After all, being attracted to adventure, science, research, exploring, designing and another person has kept this world ticking for millenniums. In fact, the entire animal kingdom (homo sapiens included) depends on this mysterious chemistry to survive. Even male ostriches dance a fancy mating dance to catch the eye of their chosen lady-bird. 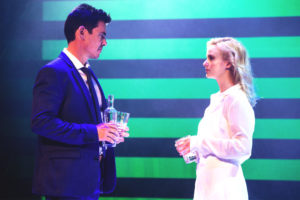 The problem is, when attraction shifts gear into obsession, the consequences can be fatal. That’s the warning English screenwriter James Dearden sends out in his one-act thriller Fatal Attraction.  Not that Dearden is moralising. He is doing what all good writers do. He’s engaging his audience in an everyday life situation to ask themselves what their reactions would be in Dan Gallagher’s (Ashley Dowds) situation?

Dan is a successful lawyer, happily married to Beth (Jenny Stead). They have an eight year old daughter Ellen. But as happens, Beth is less interested in sex than finding a nice (expensive) house in the country (near her mother) where Ellen can run freely … and keep a rabbit. Beth’s gone off for the weekend investigate a house. She’s being advised by sensible, down-to-earth estate agent Joan (Jo da Silva).

The art of seduction

Fatal Attraction starts with Dan who, having just finished work for the day meets recently divorced Jimmy (Alex Tops). Tops is a humorous character whose jazzy antics introduce a lightness into this tense drama.  Together the two men go to their local watering hole for a drink, while Jimmy eulogises on the joys of being single again.  Drinks in hand Jimmy points out an attractive woman sitting alone. Realising the two men have spotted her she introduces herself as Alex Forest (Jazzara Jaslyn), and they share a drink (or two or three). When Dan takes her home, she invites him in and – inevitably – seduces him  In fact, although Dan puts up some resistance, he’s not entirely unwilling.  However, on waking, Dan is so ashamed at his behaviour betraying Beth he says goodbye to Alex.

Unfortunately for Dan it’s not goodbye for Alex. That lovely attractive face Dan saw is false. As quick as a flash Alex can turn from seducing seductress into angry, brutal, destructive woman out only to serve her own narcissistic needs. 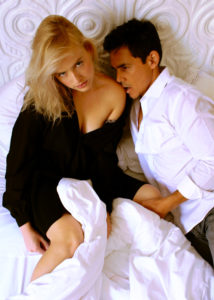 Alex’s charm may have deceived Dan.  However, Jaslyn’s cold eyes, steely carriage and calculated walk immediately draw the audience into her deceitful and excellent study of a seriously disturbed psychologically sick person.

Is Dan a weak character or does he think he’s strong by telling Beth lies to protect her? Dowds shows both sides equally well. He is weak by succumbing to Alex’s obvious wiles.  But his strength wins through when he begins fighting to keep his marriage together.  The horribly cruel abusive acts Alex inflicts upon the Gallagher family can only end one way – and it does …

Where and when: Theatre on the Bay from 16 March to 7 April