Seven soloists, seven different instruments – the Cape Town Philharmonic Youth Orchestra (CPYO) is delighted to show the diversity of its talented soloists in its Rotary Concerto Festival on 9 June 2019. Brandon Phillips will be on the podium. 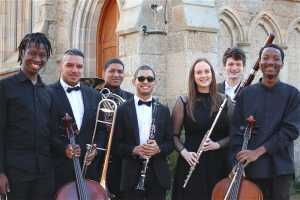 Says CEO of the Cape Town Philharmonic, Louis Heyneman, “Only a few selected musicians ever get the opportunity to play as soloists with an orchestra. We wanted to change that. This first concerto festival with soloists chosen from our own ranks gives an opportunity to all talented musicians to be the centre of attention for at least one day. This is a huge incentive to all our orchestral musicians and should be a big motivation to all to work harder. Apart from two cellists, we have a flautist, clarinettist, bassoonist, French horn player and a trombonist all playing movements from works as diverse as their own instruments.”

Heyneman notes that while Rotary and the CPO collaborated last year on an acclaimed concert with a couple of young soloists, “we decided to up the game this year and create an opportunity for more young musicians to show what they are capable of.  We held auditions with a panel of jurors and selected these seven on merit. They showcase what the youth orchestra has achieved and all of them are members, some principals of their sections. Some have more experience than others.”

For instance, Liam Slabbert has already played with the CPO as an ad hoc bassoonist and has been a semi-finalist in the National Youth Concerto competition;  clarinettist David  Cyster is also a member of the Stellenbosch University Wind Band; French horn player Herman de Wee has played in the Old Apostolic Church Orchestra; Cellist Christopher Njapha has been the co-principal of KZN Youth Orchestra  and has appeared as a soloist with USSO, CPYO and CPO; James George (trombone) was principal trombonist of the University of Stellenbosch SO,  the US Symphonic Wind Ensemble,  New Apostolic Church Cape Town Orchestra, Cape Town Philharmonic Youth Wind Ensemble and of course, the CPYO.

Flautist Amanda Lawrence also plays for the University of Stellenbosch Symphony Orchestra and was a member of the invited-guest wind quintet at the 2018 Stellenbosch International Chamber Music Festival. Cellist Nwuko Sunday Kelechi began playing the cello at the age of 13 in his local church in Lagos. He came to the Stellenbosch International Chamber Music Festival in 2015, the year after winning the Music Quest Competition in Nigeria.

First time as a soloist

For several, it is the first time they have appeared as a soloist with an orchestra and the excitement is tangible.

Herman de Wee recalls receiving the news that he had been chosen: “My emotions were all over the place. I was shocked and excited at the same time because it’s my first time playing as a soloist with an awesome orchestra.”

“I have always wanted to play the Elegie with an Orchestra and am so happy that CPYO is giving me this opportunity,” says Sunday Kelechi, who is also a soloist in the combined CPO/CPYO free lunch hour concert at Artscape in the Chandelier Foyer on 4 June 2019 at 1pm.

Still others see the CPO as their future. Liam Slabbert says that in 10 year’s time “I hope to be seated in the CPO playing in symphony seasons as a full-time player.”

For others, being part of the Youth Orchestra is critical to their lives at the moment,

James George says the CPYO has allowed him “to grow as a musician and specifically an orchestral musician. I have learned a lot in CPYO and it has made me the musician I am today.” David Cyster “loves the aspect of how music can change people physically and spiritually.”

Says Chris Njapha: “Being part of the CPYO has allowed me to strike up bonds that are too deep to describe. The orchestra provides a safe, cohesive, productive and nurturing environment.”

All this is music to the ears of all the CPO coaches and mentors who care for these young musicians, and also to Heyneman and Johann Gerber of Waterfront Rotary, the CPO’s partner in this concert who says:  “Rotary is committed to creating opportunities for our youth to develop their skills generally, and also in performing arts.  We have a wealth of musical talent in our city and this concert provides a platform for these excellent young performers to showcase their skills as soloists to their peers and the public. Hopefully this is their first step towards careers as professional musicians.”

The concert is a fundraiser for both the CPYO and for the Rotary Club of Waterfront to support a Childhood Centre in Langa and to enable deserved financially challenged learners to attend sailing trips with the Youth Sailing Academy.  It is made possible through a generous sponsorship from the V & A Waterfront as part of its Community Outreach Initiative.

What: CPYO with Brandon Phillips (conductor) and seven soloists