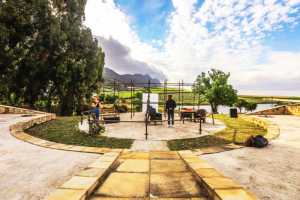 The Royal Arts Town Amphitheatre in Riebeek Kasteel is a spectacularly situated, unique open-air venue which will host a full summer season of productions.

The venue is situated in the grounds of the iconic Royal Hotel, reputed to have the longest veranda in Africa.  At the end of the hotel’s rolling lawns, with the magnificent Kasteelberg as the backdrop to its stage, is the Royal Arts Town Amphitheatre (RATA), which  can accommodate up to one hundred audience members with more than adequate social distancing measures in place. RATA is generously sponsored by the hotel’s owner, Robert Brendel.

There are many competent hands holding this venture together, including Klaus Piprek, creator and director of Solo Studios, who had a vision for the area to become synonymous with excellence in all the arts  – and the concept of Arts Town Riebeek Valley was born, calling on the skills and talents of people living in Riebeek Kasteel, Riebeek West and Hermon. 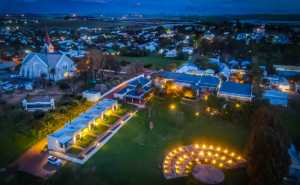 One of South Africa’s top lighting designers and theatre technicians, Kobus Rossouw, is technical coordinator and advisor. Namhla Kalipa-Tunyiswa is in charge of the training programme which is being run under the auspices of The Olive Branch Project and which is seeing several members of the local community being trained as technicians and designers who will staff the productions.

Award-wining theatre-maker and television writer/director Mark Graham Wilson is the director of the Royal Arts Town Amphitheatre, and has put together a summer season of productions which opens 18 November 2020 with the premiere of a new play, Covid Moons, written and directed by leading director, Clare Stopford.

Nine other productions starring several famed South African performers, including Roger Lucey, Hannes van Wyk, Godfrey Johnson and Dorothy Ann Gould, make up the rest of the season which runs until the end of April 2021.

Where and when: Royal Hotel, Riebeek Kasteel from 18 November until April 2021.