Somizi and Mohale The Union is a four part series based on the road to marriage between celebrity TV presenter Somizi Buyani Mhlongo and model/actor Mohale Motaung. KAREN RUTTER reviewed the first episode – the entire series has no been released: 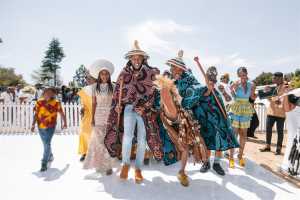 I didn’t expect to feel genuinely moved by Somizi and Mohale The Union. I mean, I love the parts of Somizi I’ve seen on screen – he’s smart, he’s sexy, he’s sparkly and he’s super-bitchy. He survived his own roast with sass, he carries off a reality-show series with relish, and he’s more entertaining then most of the Idols contestants he grills. But it’s always hi-energy stuff – I’ve yet to see a reflective moment.

However, in the first of a four part series which showcases the marriage between himself and Mohale Motaung, there were some seriously touching moments. This episode appears to be something of a general summary, where we see both men’s families perform the traditional elements of the union, plus snapshots of the extravagant white wedding which followed. The next three episodes will feature the back story to their union, and then more detail about the white wedding.

In the traditional segment we see Somizi being escorted by family and friends to Mohale’s family home, where gifts are given and later the union is blessed. And blow me down if we don’t see a nervous, very shy-looking Somizi being deferential to the elders and stepping down from his usually ultra-confident space. Later, when he communes with his ancestors, and then talks with his Mum, one gets the same genuine feeling. It’s unexpected, and it’s actually pretty moving.

What’s also amazing is the acceptance of a very openly homosexual union, by more conservative family members. Mohale tells us it was a long, hard battle, particularly with his relations – “blood, sweat and tears”- which makes the traditional elements all the more profound.

Of course, it wouldn’t be a big, fat, gay wedding without loads of flamboyance, and the snippets of the (literally) white reception are incredibly stylin’ with dancers, singers and celebs all part of the action. (and yes, I did see Juju smiling happily at one point. Who’d have thunk?) The grooms change outfits more frequently than a Top Billing presenter, there appear to be cakes hanging from the chandeliers, and everybody looks like they stepped off a Vogue shoot.

I do think it’s pretty darn amazing that South Africa is so down with this sort of shindig, and that Showmax is screening it. I have to confess, I’m looking forward to the next episodes of Somizi and Mohale The Union

What: Somizi and Mohale The Union

Where and when: Showmax