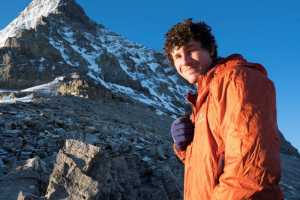 Winner of the 2021 Critics Choice Documentary Award for Best Sports Documentary, The Alpinist is now streaming first on Showmax.

On a vast, frozen landscape, a tiny speck is moving, navigating the sheer vertical plane with measured assuredness, inching steadily higher, and higher, towards a mountain peak far above the clouds. The speck, it turns out, is Canadian rock climber, alpinist, free solo legend and untamed spirit, Marc-André Leclerc, the subject of The Alpinist.

Marc-André climbs alone, far from the limelight. On remote alpine faces, the free-spirited 23-year-old makes some of the boldest solo ascents in history. Yet, he draws scant attention. With no cameras, no rope, and no margin for error, Marc-André’s approach is the essence of solo adventure.

Intrigued by these quiet accomplishments, award-winning veteran filmmakers Peter Mortimer and Nick Rosen (The Dawn Wall) set out to make a film about Marc-André. But he’s an elusive subject: nomadic and publicity shy, he doesn’t own a phone or car, and is reluctant to let the film crew in on his pure vision of climbing.

As the crew struggles to keep up, Marc-André’s climbs grow more daring. The cameras follow – where they can – as he takes on some of the most challenging ice climbs (frozen waterfalls!) and mixed terrain on the planet, including the first solo attempt on the Infinite Patience route on the Emperor Face of Mount Robson in the Canadian Rockies, and a historic winter ascent on Patagonia’s daunting Torre Egger. Elite climbers are amazed by his accomplishments, while others worry that he is risking too much…

“While solo alpinism might be the purest, most adventurous form of climbing,” Peter observes, “it’s also the deadliest.”

The documentary claims that as many as half of the world’s alpinists have lost their lives practising their craft, a fact that many consider irresponsible and indefensible, but which is also intrinsic to the allure of the sport for some of the climbers interviewed.

As Alex Honnold, the star of the Oscar-winning Free Solo, says in The Alpinist, “Free soloing is a very emotionally-charged subject and so it draws strong reactions from everybody. If you fall and die, everyone thinks you’re an idiot. You’re a risk taker, a daredevil, like ‘What an idiot.’ If you succeed, then everybody celebrates you as a big hero. But the reality is you’re the same person either way.”

Ultimately it’s the quiet, one-on-one moments with Marc-André himself that are most arresting. Diagnosed with ADHD as a child, Marc-André is soft-spoken and awkward in front of the camera, but there’s a constant crackle of energy fizzing beneath the surface – like he might take off at a moment’s notice and disappear up a mountain…

As Marc-André says in The Alpinist, “When you’re in the mountains, with a mission, it’s like all of the superficialities of life just sort of evaporate, and you can often find yourself in a deeper state of mind, and that can stick with you for a while after a big climb. You appreciate everything so much…that you take for granted most of the time. It’s kind of funny. The actual achievement doesn’t really change your life, like you think it might, but what you’re left with is the journey that got you to that point.”