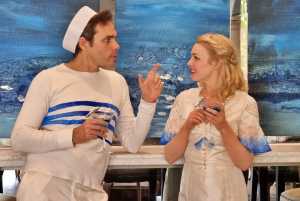 Sophistication and polish, the perennial hallmarks of A&M Productions, remain undiminished despite the challenges attendant on recurring waves of the covid pandemic.

This is apparent in their latest staging of work by Tennessee Williams, a departure from their usual presentation of complete plays by the dramatist.

The Blue Piano/The Blue Guitar offers its audience a collage of excerpts from the Williams repertory spanning some 20 years (1935 to 1957), with musical accompaniment played on the two eponymous instruments of the title.

Apart from capturing a broader perspective of the master’s dramatic art, this format encompasses a richer diversity of mood, personae, and situation than can be found in a single work. Words combine with music in a lyrical fusion as vignette succeeds vignette with the first half of the programme featuring the keyboard and the second half, the guitar.

Both are played with proficiency and finesse by the show’s musical director, Jaco Griessel. 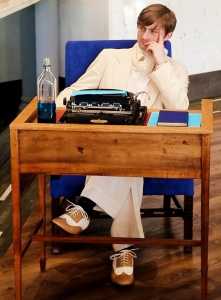 Blue is a moody colour, favoured by Williams for its ambivalence and evocative power. Its associations range from the gloom of night and depression to the sparkle of sunlit seas, the joy of clear sky or the escapism of lucent Curaçao…and a unifying factor is blues music born, like Williams, in the deep south of America.

This show makes huge demands on its cast of three, testing their versatility to the utmost as they portray multiple Williams characters, sometimes in extended monologues and more often in dialogues for two. In addition to convincing characterisation, they offer solos and duets of songs referenced in Williams’ plays.

Meyer and McLaughlin ring the changes seamlessly from jaunty to wistful, dreamy to despondent and youth to age.

Intimate theatre at its professional best

They tackle each new impersonation with authority and sing with zest, their enjoyment of the performance proving contagious as they transform costumes in the blink of an eye through minimal but effective addition or subtraction to and from existing garments. This is intimate theatre at its professional best.

Baldwin introduces both halves of the programme, impersonating an avatar of Williams/Tom. Every detail of his costume is true to period, his accent firmly anchored in a Southern drawl. Steady eye-contact with his audience in this intimate space holds patrons’ attention as, drink in hand, they prepare to enter into the spirit of the show.

However, The Blue Piano/The Blue Guitar is more than just another show: with the combination of carefully crafted set, meticulous evocation of Williams’ distinctive world, and a six-course supper as true to period as everything else in this production, it is more like time-travel to another age, its pace skillfully controlled by Abrahamse’s astute direction.

Where and when: The Vineyard Hotel from 25 September to 10 October 2021 (Friday, Saturday, and Sundays)