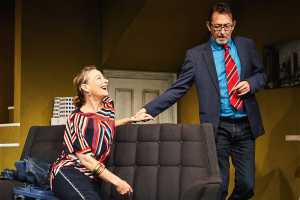 There’s a lot of laughter that accompanies this production of Edward Albee’s The Goat, or Who is Sylvia? – which is unexpected, taken that the play touches on a number of taboo subjects.  But such is the power of the script, plus the performances of the cast and the guidance of the director, that what should be seen as obviously shocking is rather experienced as obscurely surreal. Funny, even.

Of course, a lot of it is nervous laughter, too. For we are never too sure where Albee is taking us, and true enough, by the end third of the play we have plunged into some pretty turbulent territory. Like with Who’s Afraid of Virginia Woolf, we’ve publicly witnessed the ugly breakdown of a personal relationship – but there’s not just bitterness here. For the matter of this relationship – and what has caused it to implode – is a topic that challenges more than the concept of a committed marriage.

Outwardly, architect Martin (Lionel Newton) and stay-at-home wife Stevie (Jennifer Steyn) are a happy and well-matched couple, with an equally happy gay son Billy (Sihle Mnqwazana). But when Ross (Paul Savage), Martin’s oldest friend, prepares to do a TV interview to celebrate several of Martin’s current career achievements, the architect appears distracted and perhaps, even a little distraught. When pushed for the reason, Martin confesses he has fallen in love. With a goat.

When Stevie finds out, via a letter written by Ross, her world falls apart. Both Stevie and Martin profess to have never strayed from their marriage, and indeed, their partnership seems strong, robust. But as Martin steadfastly refuses to acknowledge that there may be something wrong about his love for Sylvia, the goat, the more he tries in a bewildered fashion to try and explain his genuine passion, the more she reacts with horrified anger. And great sadness. For, as she says, there is no coming back from this. He has led them both into the abyss. 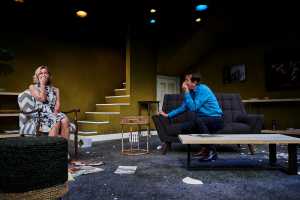 Watching the scene from the sidelines, Billy is both appalled and confused by his father’s actions, and protective of his mother and her response. Martin, who has hitherto professed a liberal acceptance of Billy’s sexuality, goes off-script to throw in negative references to cottages and tricking, in defense of his own desire. Ross, who makes an unexpected appearance at an awkward moment, is driven to ask if there is anything “you people” don’t get off on? Whereupon the story slips a little more into the darkness. By the time Stevie presents her own solution, we are all emotionally spent.

Opening up a portal

The Guardian’s Michael Billington describes The Goat as examining “the uncontrollable nature of human sexuality”. By pushing a whole lot of “bad” buttons, Albee opens up a portal to a space where lines are questioned and consequences spiral out of control. It’s not always easy to watch – but it is, crazily, quite humorous at the same time.

Director Mdu Kweyama corrals his cast with a masterful hand, keeping the pace flowing and performances on point. Paul Savage pulls off a warm and convincing role as the (ever-more-perplexed) face of “normality”, while Sihle Mnqwazana skillfully negotiates a balance between hurt confusion and hotheaded impulse. But it is the two leads who bear the brunt of this brutal, stinging and challenging production. 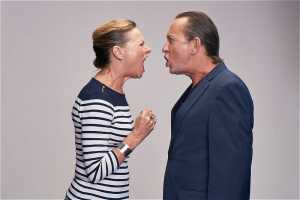 Lionel Newton is a sinewy, wound-up mess, a man honestly perplexed at where he finds himself and irrationally drawn to explain. It’s a strip-naked showing that Newton puts on, intense and compulsive and compelling. He’s matched by Jennifer Steyn’s whirlwind of a presence, from the moment she innocently sashays on set to her plate-smashing, belly-groaning eruption of pain and pique, to her final, silent stroke of revenge. It’s hard to imagine both doing this every night. And they do, magnificently so.

The Goat, or Who is Sylvia? is not easy watching. But it’s brilliant, challenging theatre. It’s  even comedy, at times …

What: The Goat, or Who is Sylvia?