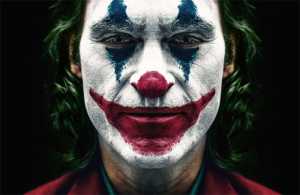 Intense and disturbing, Joker is a well-crafted movie, if rather open-ended in its intentions.

It features a well-considered score and some beautiful framing of sequences, but it is the rage that pulses under the surface that gives the film its heartbeat and Joaquin Phoenix is disconcertingly mesmerising as its vehicle.

Phoenix’s aspiring comedian Arthur Fleck is a character who is discomforting – he doesn’t fit neatly into the world and he perturbs people. Awkward and gaunt, he can’t keep a lid on the crazy, and people don’t know how to handle that, which makes them fear him.

A clown by day, aspiring stand-up comedian at night, Fleck believe his purpose in life is to bring joy to people, but the world doesn’t quite “get” him. Then there’s the mask he wears to try and fit into the world, his normal person mask, but this too is slipping.

Phoenix doesn’t try for Heath Ledger’s insouciant menace but he does run the full gamut of psychosis, and by the end of the film you have to wonder how much of what happens, happened in his head and how much happened in the real world. His is a Joker that is more gritty anti-hero closer to Darkman than to Jack Nicholson’s garish cartoon clown Joker.

While comic book Joker has always been a nihilistic character who has given up on society and is hellbent on destroying its structures and institutions, this film character shows us why. Rooting his motivation partly in his psychosis is problematic (not all mentally ill people are going to turn to violence if they’re off their meds) but this is countered by his showdown with late night TV show host Murray Franklin (de Niro in non OTT mode is quite good, actually).

Fleck’s most fervent wish is to make it as a stand-up comedian and a slot on the show is where Franklin calls BS on his behaviour, saying responding with violence is a choice.

All of this plays out in a crime-ridden 80s Gotham, New York which is rife with strikes, huge rats and incivilities big and small. Fleck inadvertently sets off a political movement of ordinary people sick of the rich Wall Street types telling them what to do and much violence ensues. 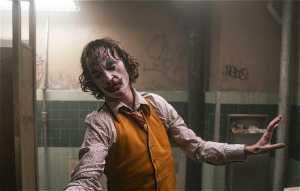 The “narrative of anxiety” (thanks The Atlantic) around fears of mass shootings at screenings which has taken on a life of its own, seems to be as much about this part of the plot as it is about the state of American pop culture.

So, too how you read this film depends on your outlook. Is director Todd Phillips dissing incel culture or trying to explain mass shootings in the US? Phillips has expressed surprise in interviews at the film becoming a lighting rod for violent behaviour, saying it is not his job to teach an audience morality.

True, but the film both glamorises Fleck’s behaviour even as it goes tut tut over his violent ways, which is either disingenuous, or genius, depending on what you take out of the film. Either way, watching it is not going to be a bland experience.