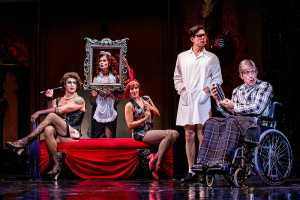 The Rocky Horror Show pretty much comes with an audience default setting, in that most punters will be 99.9% into the production before they even get to the theatre.

Half of them will have seen it before, and will dress up appropriately and engage enthusiastically with the cast (“Slut!!!”). The rest will be wide-eyed converts, in awe of the myth. So the feel-good factor is predicted to be pretty high.

But that doesn’t mean that just any old production will get the nod, and audiences, especially Rocky veterans, will just as easily snub a poor performance.

No such fear with this Pieter Toerien presentation, however, which scores on every level – a snappy cast, sexy costumes, a clever set, a tight onstage band and a mischievous directorial hand. The combination is irresistible, making this Rocky Horror Show a clear hit over the summer season.

[Alert to newbies – the musical is about two squeaky-clean college students who stumble upon a sexy transvestite and his posse. That’s all you need to know. Oh, and there’re aliens.] 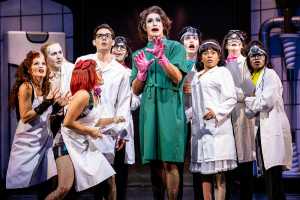 Hugh Durrant has designed a set which combines both a playful, B-grade edge with touches of OTT opulence, while Sue Blane’s costumes capture the essence of each character, from straight-ahead nerd to full ‘vestite. The band under Bryan Schimmel’s beady eye is totally on point, and director Christopher Luscombe (with Anton Luitingh as resident director) makes sure the action never falters.

But, of course, it is those upfront and onstage that carry the biggest load. And here they manage the weight effortlessly. The corps are colourful and choreographically sound, with larger roles such as Magenta/The Usherette done deliciously well by Marlee van der Merwe and Columbia by Stefania du Toit. 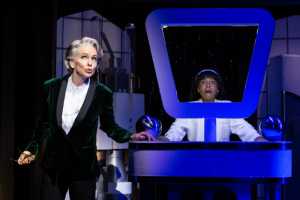 There is inspired casting in playing Kate Normington as The Narrator, who takes a suave, sophisticated turn with a wicked edge and a great voice. And Didintle Khunou as Janet is yet another excellent placement, who keeps one’s attention held throughout. If these two are the alpha females in the show, then Rocky (Jarryd Nurden) and Frank-N-Furter (Craig Urbani) are the male equivalents, both bursting with a physical presence that matches the large Artscape stage. Rocky, of course, is required to be buff and handsome (which Nurden has in spades). But he also has a great voice, cool dance moves and a good sense of comic timing, making him a kind of triple-threat Rocky this time around.

And then Frank-N-Furter – the role which basically holds things together. Urbani brings a toughness to the part, more butch then femme, more beefcake than fruitcake, but without losing that essential camp quality which has to be a part of the performance. He’s a Muscle Mary with a penchant for high heels who manages to dominate each scene; and he looks like he’s having the time of his life. The audience love him – and he’s a big reason why the show pulls together. 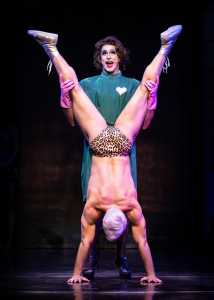 Generations have flocked to see The Rocky Horror Show, which is over 40 years old now. I saw several friends with their teenage kids – many who clearly identified with the transgressive nature of the show – and reckoned that there’s something really delicious when a musical about a polyamorous transvesite who seduces both men and women, has built a beautiful toy boy to “release his tension,” and is handy with a chainsaw, has become a kind of rites-of-passage experience you can bring your teen to. It’s also a sweet reminder of how far we have come from the time it was banned in apartheid South Africa.

So sashay on down to Artscape this summer for an evening of sizzling hot fun. It’ll be well worth it, promise. You may even want to dust off your old stilettos for the trip …