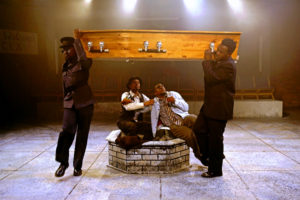 What Magnet Theatre has done with Friedrich Dürrenmatt’s The Visit is dynamic, fascinating, disturbing – a treatment that showcases both the gravitas of the script and the great ingenuity of the team. Audience attention is riveted for all three acts of this tragi-comedy, with powerful performances and a script that is oh-so-relevant maintaining engagement. And ironically, it is the very limitations imposed on this production that make it so riveting.

Dürrenmatt, a Swiss author and dramatist who wrote The Visit in 1955, set his story in a fictional European town called Gullen. When Magnet Theatre applied for the rights, asking that the play be localised to suit both the performers and a South African scenario, they were told they could indeed do the play – but with no cuts or changes or additions to the context. It had to be exactly as originally written.

A challenge. But one which has been wonderfully managed. And, through its enforced teleportation from a European town to a South African stage, without showing any signs of travel, this production is perhaps even more robust. A South African setting would have made things very obvious. This way, there is a surreal subtlety to the action. 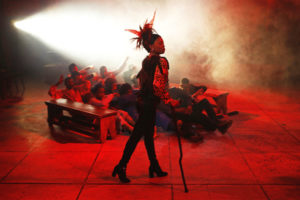 How much does it take to corrupt a person?

The Visit pitches a very relevant question – what price to put on one’s moral values? Put another way, how far would one move from one’s core principles when offered a load of cash? How much does it take to corrupt a person? Or a group of people? A town? A country?

Claire Zachanassian is a very wealthy woman who returns to her impoverished hometown of Gullen to make her former neighbours an offer – to take revenge on a man who treated her badly many years before, in return for a large sum of money. Their initial reaction is one of horror. But it doesn’t take that long for the lure of lucre (cleverly portrayed here by the acquisition of yellow shoes) to seduce the townsfolk. And Anton Schill, the man who committed the crime, finds himself at their mercy.

Using a practically bare stage with a minimum of props (Craig Leo’s stylish design), the cast convincingly created the environment of Gullen, it being somewhat grotesque in its fawning desire to placate its benefactor and procure evermore funds.  Multiple roles went to the 17-member cast, from burgomaster from town butcher to teacher to policeman and more, the actors fluidly changing characters or, in the case of Claire and Anton, actually duplicating the roles. While all were impressive, some stood out either by virtue of their presence – such as Sityhilelo Makupula as Bobby the butler, who scarcely said a word but had an edge with his Manu-Dibango-meets-The-Rock attitude, and Luxolo Mboso as Pedro, the hapless fisherman fiancee.  And others stood out by virtue of their performance – and here Carlo Daniels and Sizwe Lubengu in the role of Anton were both thoroughly, heart-breakingly engaging, while Abigail Mei in the role of Claire totally stole the show – her sensuous, threatening command of the stage was mesmerising. 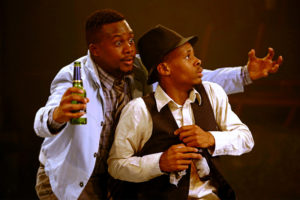 The Visit is a fantastic, clever and all-too-real production that is a total credit to Magnet Theatre. Watching it on Youth Day, June 16 whilst surrounded by young people who were entranced (and at times shocked, outraged and amused – as young South Africans, they totally got it) was perhaps one of the best theatre experiences I have had this year.

Just one niggle – why, oh why, such a short run? I think there are many people who would  want to experience this production. Bring it back, please?