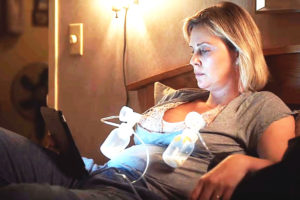 I was feeling a bit under the weather this Women’s Day and so I thought I would honour the day by watching something female oriented. I have been wanting to see Tully, but I didn’t get to it when it was on circuit, so it seemed like a good choice.

I had a twinge of reservation about a movie starring Charlize Theron since the last time I saw her in anything it was the abominable revenge her ex, Sean Penn took out on her in The Last Face; almost the worst movie ever. But, I think she is really good, so I was prepared to give her another bash, and Diablo Cody wrote the screenplay of Tully and she is responsible for one of my all-time fave movies, Juno.

All I knew about Tully was what I had seen in the trailer; desperate and exhausted mother, Marlo, finally surrenders and hires a night nanny after giving birth to her third child. The night nanny is to help her bridge the gap and get some rest and allow her to be a better mom. It is a very difficult movie not to give spoilers of, so I am not going to say another thing about the plot, other than it has a really very surprising twist. And yes, it is a bit heavy handed in its resolve, but I didn’t see it coming and that was pretty awesome.

Firstly, I was absolutely taken in by the script of this film. The dialogue is really good, and the characters are complex. Even the children are layered and interesting, and not the usual slap together of cute and precocious.

Then, Charlize is amazing. Her performance is nuanced and deep and detailed, and she embodies Marlo with charm and sensitivity and boldness and emotion. I could not take my eyes off her. It is her movie. But what is amazing is that she is devoted to telling the story, and so she hands herself over to it as a performer. I was in awe.

And it is a movie that describes the loneliness of motherhood in a way that even hardened non-mothers (me) can imagine. I am still thinking about it. I was moved and surprised and shocked and charmed by this film. It is definitely worth checking out.