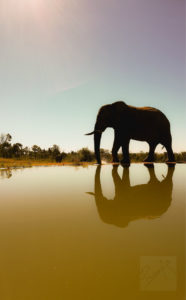 Located in the 35 000 hectare Welgevonden Game Reserve in the Waterberg (Limpopo province), it is home to approximately 100 African elephants who, along with many other species, including the rest of the Big 5 and more than 129 other mammal species, 350 birds and 2,000 plant species, are protected by a highly effective anti-poaching unit.

World Elephant Day was created in 2012. Bringing the world together to help elephants, it is a day to honour elephants, to spread awareness about the critical threats they are facing, and to support positive solutions that will help ensure their survival.

The world’s largest land animals, the status of elephants are classified as vulnerable since they remain under threat from poaching, habitat loss, and human-wildlife conflict. Since 1979, African elephants have lost over 50% of their range and this, along with massive poaching for ivory and trophies over the decades, has seen the population drop significantly. In the early part of the 20th century, there may have been as many as 3 to 5 million African elephants, but today there are only around 415,000 left in the world. 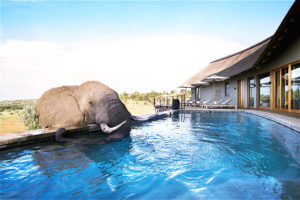 Mhondoro guests are often treated by sightings of herds of elephants visiting the lodge waterhole, providing excellent photographic opportunities close up at water level, from the game viewing hide that is connected to the lodge by a 65m long underground tunnel. And sometimes, lucky guests may be surprised by elephants taking a drink from one of its natural saltwater swimming pools!

Privately owned, Mhondoro Safari Lodge & Villa on Welgevonden Game Reserve stretches across 35 000 hectares in the Waterberg and is a mere 2h 45 minute drive or a 50 minute flight from Johannesburg. Guests can expect varied terrain and a diverse natural habitat featuring the ‘Big 5’, including a large white rhino population. Guided walks with the endangered white rhino are very popular with guests, as is watching the ‘resident’ herd of elephants who visit the lodge’s waterhole almost daily.

Update: Life in a time of Corona: The Rome Diaries