In celebration of World Rhino Day in the month of September, Mhondoro Game Lodge has introduced rhino tracking as a new guided activity within the Welgevonden Game Reserve in the Waterberg (Limpopo province, South Africa). Spread across 35 000 hectares, Welgevonden is home to a large population of White rhino (Ceratotherium simum), protected by an effective anti-poaching unit within the borders of the reserve. 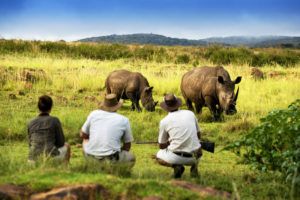 Accompanied by experienced game rangers, guests have the opportunity to embark on a once-in-a-lifetime experience in search of these highly endangered animals, which are widely prosecuted and poached for their horns.

Due to the varied terrain, rhinos can be tracked on foot and observed in their natural habitat. The male White rhino weighs in at more than 2000kg. As grazers they are perfectly at home in the beautiful valleys and plateaus of the reserve. Welgevonden’s rhino population is in very good health, with a few youngsters born each year. Thanks to large numbers of rhino in the reserve, guests have an excellent chance of tracking a  “crash” of rhino, the collective noun for these large pachyderms, and may even be lucky enough to catch a glimpse of a juvenile or a new-born still learning the ropes from its mother.

During this unique excursion, rangers will share up to date information about the current and historical status of these ancient animals, including educational aspects relevant the species’ protection status, its physiology and behaviour. The Mhondoro Rhino Tracking activity could vary from between one, to 2.5 hours and costs R1000 per person.

Dutch-owned Mhondoro is a fusion of African chic and edgy European influences. Unique features include a photographer’s dream: a waterhole with underground hide that is connected with the main lodge by a tunnel; and three heated swimming pools.

Privately owned, Welgevonden Game Reserve stretches across 35 000 hectares in the Waterberg and is a mere 2h45-minute drive or a 50-minute flight from Johannesburg. Guests can expect varied terrain and a diverse natural habitat featuring the “Big “’, including a large white rhino population. Guided walks with the endangered White rhino are very popular with guests, as is watching the resident herd of elephants who visit the lodge’s waterhole daily. Mhondoro is the ultimate big sky destination, with stunning unimpeded sunrises and sunsets over the Waterberg mountains and valleys. The wildlife experience is complemented by Mhondoro’s luxurious accommodation, indulgent spa treatments, fine cuisine and passionate service.

Mhondoro is child-friendly and welcomes children of all ages. Little travellers can run free at the dedicated open-air play area, which is protected by an elephant fence. A play room in the main lodge is stocked with games where children can enjoy themselves without disturbing other guests, while special children’s activities can also be arranged.

Update: Life in a time of Corona: The Rome Diaries