“Don’t Forget Yourself” is the translation of the captivating new track titled Ungazilibali, a new single by five female superstars called Iqonga, which has been released in September 2019 on the Platoon Africa label. 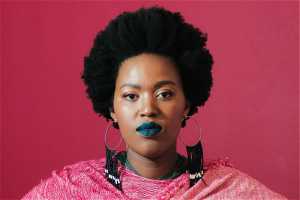 The five performers who created Ungazilibali are South African singers, Zolani Mahola, Ami Faku, Bonga Kwana, Msaki (pictured left),  plus Eryn Allen Kane who has been visiting from the USA.
The song is an ode to women’s strength and a call to recognise their unlimited potential and the crucial role they play in family and society on every continent. The collective expression of these five female artists – each one dedicating a verse to the track through which they delve into their own personal experiences growing up – results in a moving tribute to the importance of women around the world regardless of cultural traditions and diversity.

One of South Africa’s most notable and respected voices, Zolani Mahola has recently announced her new solo journey, following on from a long and successful career with Freshlyground. She is seen by her fans not just as a distinguished musician, but also as a transformational speaker, storyteller, and performer.

“We have a special mission here on earth as any creative, especially as a female, and there are waves that we are tapped into that we are only beginning to scratch the surface of. This world is very deeply in need of our particular energy and our particular voice“ says Zolani Mahola.

Relatively new on the scene, Ami Faku is quickly becoming recognised as one of the most promising singer-songwriters in the South African music industry. Her much anticipated solo debut album Imali will be out end of September 2019. Singer, poet and songwriter Bonga Kwana is a self-taught and deeply expressive force on the South African music scene with a great desire to reach beyond the boundaries in her search for social awareness and tolerance. Msaki is an inspiring singer-songwriter, composer and producer. Her versatility is reflected in her past album Zaneliza, as well as notable and much beloved collaborations with Prince Kaybee and Tresor. Ever inspiring, she is currently working on new material which will be available in the coming months.

Eryn Allen Kane is a Detroit native and soul songstress who has attracted the attention and praise of both critics and legendary musicians. Her new project embodies a profound wisdom on a poignant seven-track EP titled, A Tree Planted By Water.

The single Ungazilibali has been recorded by the London-based company Platoon Africa, whose its mission is to evolve the music industry through a more philanthropic and artist-centric philosophy. Designed to seek out and offer a platform for nurturing musical and creative talent around the world, it recently planted roots in South Africa with the creation of the Cape Town Creative Lab (CTCL).