Violinist Veriko Tchumburidze makes her SA debut in the second concert of the Cape Town Philharmonic Orchestra’s Summer Music Festival. She speaks to PETA STEWART about her career: 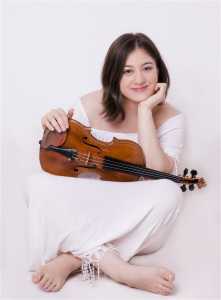 There can be no holding you back if, at the age of three, you know what you want. Veriko Tchumburidze was three and a half when she took her first violin lesson, and this was after begging her mother many times for them.

For this young woman, at 20 the winner of the Wieniawski Competition in 2016, is coming to Cape Town to make her South African debut in the second concert of the Cape Town Philharmonic Orchestra’s Summer Music Festival. She will play, naturally, the Wieniawski Violin Concerto on Thursday, 23 January 2020, with the CPO under the direction of another CPO newbie, the American conductor Brandon Keith Brown, who is also making his debut with the CPO.

Ms Tchumburidze says that “Henryk Wieniawski has a different place in my heart as a wonderful violin virtuoso himself as well as a composer. I always feel very close to his music; it feels very natural to play his music and, when I do, I feel I knew him personally. “

Winning competitions opens doors, and for Ms Tchumburidze winning the 15th Henryk Wieniawski International Violin Competition “has brought opportunities beyond my imagination.” These include playing with the Melbourne Symphony Orchestra and Zurich Chamber Orchestra, and festivals such as the Radio France Festival Montpellier, Beethoven’s Easter Festival collaborating with artists such as Marc-Andre Hamelin, Tabea Zimmermann, Leif Ove Andsnes, and Maxim Vengerov.

“Even just being a part of the competition which bears his name,” she continues, “and has a long history and tradition is pure honour and  joy.  This competition connected me with so many people around the world, something that has always been one of my biggest dreams.  Since that October 2016 day, I have had incredible opportunities to share my music; some unforgettable  moments with wonderful musicians and audiences all over. For this, I will always be very thankful to the Henryk Wieniawski International Violin Competition for making the start of my career so beautiful.” 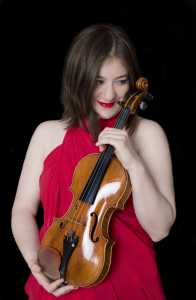 Ms Tchumburidze was born in Turkey to Georgian parents and that’s where her roots lie, but Turkey is also her home country, the place where she was born and raised, so she is Georgian-Turkish (and has won competitions in both countries) but it is in Munich that she now makes her home.

She comes from a musical family. “My mom, sister are violinists, my dad is an oboist and my aunt is a mezzo-soprano. So, music has been always in the centre of my life. My ﬁrst wish was to become a ballerina but later, listening to my mom’s class concerts and lessons made very excited to become a violinist. After begging my mom for many times to teach me violin, ﬁnally at age of three and half I started playing violin.  Immediately music became my biggest priority,” she says.

In fact, it has been such a priority that she never ever considered another profession! Fortunately, she had the discipline, the determination and the talent.

She is excited to be making her debut with the CPO. The CPO’s artistic executive Sergei Burdukov “works closely with my manager Natalja Slobodyreva whom I have known for a few years and the offer came … Luckily, my schedule was available to open for this date and I am very much looking forward to coming, meeting new people and playing in South Africa for the very ﬁrst time.” 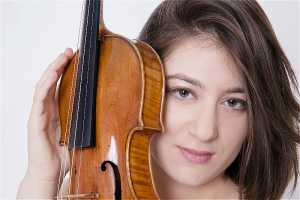 When at home in Munich, Ms Tchumburidze continues her studies with Prof. Ana Chumachenko at Hochschule für Musik und Theater,  having studied at the Mersin University State Conservatory in Turkey and the Hochschule für Musik in Vienna as the scholar under the “Young Musicians on World Stages” (YMWS) project. She plays many solo concerts as well as chamber music in many forms, and looks forward to the day when she will teach.

“I travel most of the time in Europe for concerts as well as Australia in 2019 and South Africa in 2020 – this makes me very happy to get to know wonderful cultures and people,” she says.

“Curiosity keeps me very motivated.  Curiosity to experience new  things, so travelling is important to me.  I enjoy discovering new places.” She also likes reading, watching movies and of course spending time with family and friends.

We can look forward to her performing on a 1756 Giambattista Guadagnini instrument generously provided by the Deutsche Stiftung Musikleben since 2016.

Where and when:  Cape Town Philharmonic Orchestra’s Summer Music Festival on Thursday, 23 January 2020