Its January 2020 and that time of the year again when the word Veganuary often pops up. So what is Veganuary? For those not in the know, Veganuary is a UK-based non-profit organization that encourages people to go vegan for the month of January – and beyond – as a way to promote and educate a vegan lifestyle.

Since the event began in 2014, participation has more than doubled each year and during the 2019 campaign, more than a quarter of a million people worldwide took the pledge to try a vegan diet.

But it’s not only one month that the organisation focuses on and throughout the year, Veganuary encourages and supports people and businesses alike to move to a plant-based diet as a way of protecting the environment, preventing animal suffering and improving the health of millions of people. And its effect is that more and more brands, restaurants and supermarkets are not only promoting the campaign but also launching new vegan products and menus.

In South Africa the vegan scene is hotting up and recently Johannesburg came in at number 10 in the world’s top 50 most vegan-friendly cities (behind New York, Athens, Orlando, Florence, Venice, London, Amsterdam, Phuket and Dublin – which took the number one spot.).

The country’s first Vegan & Plant Powered Show looks set to bring in the crowds when it opens at the Cape Town International Convention Centre on 30 and 31 May 2020 and Capsicum Culinary Studios, SA’s largest culinary school is incorporating vegan dishes into its teaching programme as part of their healthy-eating syllabus.

Says Lianne Holt, principal of the school’s Cape Town campus: “In the last 10 years we have seen a steady increase in the number of people choosing a vegan lifestyle. The motivation for this stems from animal welfare, environmental concerns, religious reasons and a healthier lifestyle. The choice to be vegan can be defined by each individuals’ personal intentions.”

A vegan diet can of course be 100% healthy if managed correctly and attention is paid to getting all the necessary nutrients and vitamins the body requires. Ideally a vegan diet should be mostly plant-based whole foods and should include plenty of fresh fruits and vegetables, whole grains, beans, legumes, nuts and seeds.

Because vegan diets often rely heavily on these ingredients, they tend to be higher in vitamins, minerals and fibre. Healthy vegan diets are saturated with vitamins B1, C, and E, folic acid, magnesium, and iron while also being low in cholesterol and saturated fats.

But, a vegan diet, if not followed properly, can also result in a high fat diet full of calorie dense food items which could cause an array of health issues. Indeed, vegan junk food and treats are on the rise and are a massive draw card for people who worry about veganism having ‘no variety’.

Says Holt: “You can be vegan and still have a very poor diet. The ever popular Oreo cookie is a good example of a bad advertisement for vegan food, while vegan cheese is another example of a food item which is mass produced and thoroughly processed to achieve an authentic texture and mouth feel.”

Check out this tasty vegan recipe.

Method:
Ensure every single ingredient in the summer rolls is prepared/chopped/cooked before assembling.

Prepare the dipping sauce by whisking everything together in a bowl or use a food processor. Add everything to a medium bowl (except water and optional garnish) and whisk until smooth. Add 1-2 tablespoons of warm water or until you reach desired thinness. Pour into a serving bowl and top with garnish. Set aside.

Place a few sticks of carrot, cucumber, red pepper, and a sprinkle of cabbage on top of the bottom ⅓ of the rice paper. Then, a small amount of noodles (if using), a slice or two of avocado and a shredded mint leaf. NB: do not overstuff the roll.

Roll up tightly by gently pulling up the bottom of the roll and roll over the filling. Then, roll and use your hands to tuck the filling in as you go. Remember, you want a very tight roll.
After rolling each, place on a serving plate. Cut in half, sprinkle with sesame seeds, and serve with peanut sauce. 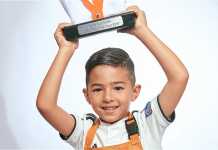 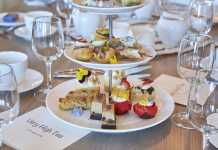 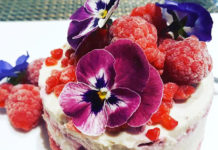