It’s a crown birthday of sorts for the Figure of 8 Dance Company – formed in 2014, it turns five this year. Plus both founder-dancers Grant van Ster and Shaun Oelf celebrate their birthdays on the fifth of their respective months. 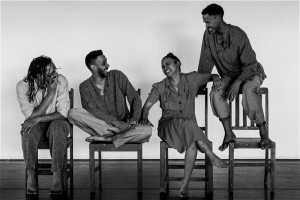 To celebrate they will present a season of a new original piece of work. Wag/Waiting is inspired by a short dance piece they created on the Unfinished stage – Darkroom Contemporary’s platform for creating experimental works in progress, literally on the fly.

“We had great feedback from that performance. We rested it for a while, and now it’s time to do it,” said Van Ster.

This time around they introduce two dancers new to Figure of 8 – Dustin Jannetjies and Gabriela Dirkse  – who have come to work with them following an exhausting audition process.

They find the two to be a good fit because Dirkse comes from the Jazzart tradition which gave them their start so she understands how they work to tell a story on stage, and Jannetjies matches not only their height but also their focused exuberance on stage. Plus the two newcomers draw on their experience of waiting in the queue to audition to influence the dance piece – Wag/Waiting is about all the ways we wait and the different ways people react to the state of inaction. 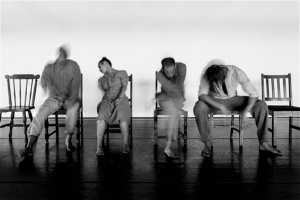 The back of the stage will be littered with various wooden chairs (sourced from all over Cape Town by set designer Carin Bester). “With waiting, a chair is the most used object, it’s the most obvious thing to use,” explans Van Ster. “The different chairs will give it character because we find ourselves sitting on different kinds of chairs when we wait and that tells a story already, in a way. Then you add the body on top and you’re sitting with a whole novel.”

“So eventually everything will be broken up into little pieces,” explained Oelf. But, if you want to know how that is going to happen, you have to watch the actual performance.

While both teach, choreograph and dance separately and together, Van Ster and Oelf always circle back to Fo8, which is basically funded out of their own pockets. Seen at Woordfees earlier this year (as one of the first two dance productions ever to be mounted at the Stellenbosch-based arts festival) presenting signature duet Couch, Fo8 will also be on Ndoni’s collaborative staging of Beyond in August and will find a way to present Wag/Waiting in Okiep where Jannetjies is from. 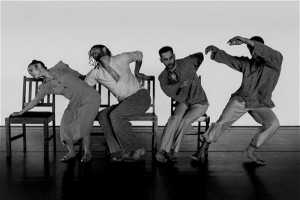 Earlier this year they were approached to work with Kristine Elliott Schwabacher at Eerste River High School. An ex-ballerina with the American Ballet Theatre, Schwabacher travels to South Africa annually to do outreach work with Dance For All and wanted to work in Eerste River this year.  Subsequently they have decided to return to the school and keep on working on a dance outreach programme: “We did a three day intensive in which we taught them repertoire and classes which culminated in a viewing for the parents and everyone.

“It was such an inspiration that we realised we had to keep it going and that is the reason for us starting our outreach programme. Just seeing the hunger of the kids and seeing how they actually step up to the plate. I think the fact that they can see they can do something, you can become something… We got them to a point where we lifted their spirits so high. Just hearing I’m from Eerste River and that Shaun is from Knysna, it makes them more willing to take this path, in a way,” said Van Ster.

“And in the long run we’d love to start something in Knysna as well, that’s the plan, to go back,” said Oelf.

Tickets for Wag/Waiting have been pegged at R100 and anyone who is able to buy an extra ticket is urged to donate it to someone who cannot afford to pay their own way. You can either buy the extra ticket from Webtickets and send it to fo8dance@gmail.com or contact them to discuss how you can make a dance fan’s day.