FROM THE TOP. Dance exhibition. Presented by The Waterfront Theatre School. Directed by Delia Sainsbury. At The Masque Theatre until 7 September 2019. SHEILA CHISHOLM reviews the final dress rehearsal.

It is worth repeating what I have said before – as long as young people continue dancing with the level of passion Delia Sainsbury’s Waterfront Theatre School’s 50 dance students displayed at their final dress rehearsal, world affairs can’t be that bad. Yes! Our youth are deeply affected by past and ever-present violence so, choreographers are using their works to shout, “Stop it, we want to live in a caring, uncorrupted society”.

Sainsbury’s school has chosen pacifist ways to register pleas to the powers that be to “sort out our problems”. But no matter outside woes, while they follow their dancing hearts, news (rightly) swirls over their heads…and on they dance…

And for a couple of hours dozens of guests from surrounding retirement homes, let corruption and Brexit swirl over their heads as they happily sang, clapped, sometimes stood up to jig to one or another well-loved 1960’s tune that backed a particular dance number. 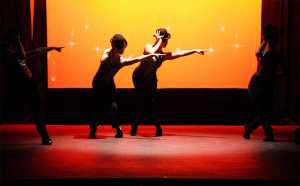 From the Top showcased 15 numbers in the first act and 11 in the second.

First up in that genre was Swing It. A lively number choreographed by Simone Marshall Kleinenberg for 10. Tap is a technique where foot work leaves no area for fluffing. Every shuffle, toe, heel, tap has to be as clear as a bell. Not easy synchronising intricate basic step combinations, while arms, in perpetual motion, keep time with snappy feet. Never did I notice a beat missed … well done.

Bradley’s Fallen Hero’s reminded us guns and warfare are ever-present. Yet the simple gesture of putting a flower into a soldier’s rifle indicated how simple peace can be restored… where there is the will. Against historical video clips, Bradley’s We Rise reflected women’s protests against abuse and demands that their human rights be recognised.

Brabant’s Colour Blind introduced a love theme. Fools in Love a sextet by the late Keith Galloway had some really poignant undertones.

Fun and games came from Brabant and Jones’s Carol of the Bells – a delightfully amusing take on Christmas elves, toys for Christmas presents with a gentle a prod to start Christmas preparations.

Unfortunately there were too many items to pass comment on each one, but overall From the Top lifts spirits and is well worth an outing…. even on a cold evening.

Just two gripes – the energy delivered by each and every dancer as they leapt, swung arms forward and back, flicked and high kicked legs, astonished. I would have liked one or two moments of quiet and stillness to show dancers have as much technical control in adagio as they have in allegro.

The second moan is a musical one. Too many recordings, with or without singing, ended abruptly, thus choreographers failed to follow the golden rule about showing a clear beginning, middle and end. Numbers had a beginning, a middle, then ended abruptly in a tableau.

These are really small gripes in comparison to a praiseworthy evening, delivered by a great bunch of kids dancing their hearts out.