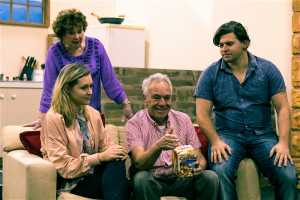 It’s a major step from stage manager and actor to sitting in the director’s chair. Anyone who chooses to move there will have learnt a production’s well-being falls squarely on their shoulders. That’s a heavy burden which not all new directors have the ability, or talent, to carry as successfully as debutante Lauren Haupt does in Weekend Comedy.

Yes, there were moments where a more experienced director would have spotted the possibility of memory lapses, noted cues were often too slowly picked up, that glamorous Hanna Crafford (as Jill) overused her hands, Lance Frodo Laubscher (as Tony) seemed at a loss what to do with his (so thumbs tucked into jeans solved that problem), while “four, frequently, standing passively in a row” slowed momentum.

Those flaws noted, they mustn’t detract from Haupt’s handling of Jeanne Bobrick and Sam Bobrick’s Weekend Comedy.  She treated this amusing tale of how two couples see themselves and how others do with a sensitivity that forecasts a future for her as a director.

Told over two acts/six scenes we meet Peggy (Cindy Nixon) and Frank (Chris Doran) as they settle into their rented Knysna cabin for the weekend.  Married for 23 years, Peggy has donned a sexy black dress in a (vain) attempt to reawaken Frank’s sexual interest in her. Frank, a plain, down-to-earth man, considers romance no longer necessary in his marriage … he’s adamant there’s a difference between love and passion.  Poor Peggy. Her eyelashes are fluttering overtime when in tumble Tony and Jill clutching each other in the kind of embrace Peggy is longing for from Frank. 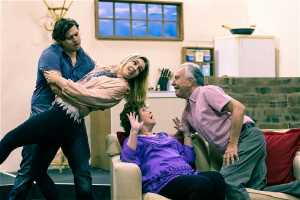 The attractive cabin holds special meaning for Tony and Jill who are celebrating their third anniversary together and in no uncertain terms expect Peggy and Frank to leave.  Eventually they reach a compromise. Tony and Jill can have the en suite bedroom. Peggy and Frank will doss down on the living-room couch.

However, it’s not sleeping on the couch that bothers Frank, it’s being cut off from the bathroom that does. That’s when some unnecessary lavatorial language and scenes are introduced. Still, it’s all done with good humour with Doran’s characterisation the production’s strength.  He has a natural way of speaking, moving and interacting, so let’s see more of him in future productions.

Once married American co-authors Jeanne and Sam Bobrick’s script challenges the gap between 20 something lovers and 50 something married couples. They explore how each generation communicates. What each age group considers relevant and their expectations for the rest of their life.  This philosophical take on Cahn/van Heusen’s 1955 Tin Pan Alley hit song Love and Marriage is enjoyable fare.

Where and when: Milnerton Playhouse until 10 August 2019