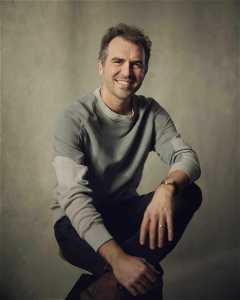 White Gold, a chilling depiction of the persecution of people with albinism across Africa, has a fast-growing collection of accolades including this year’s “Best Narrative Short” at the Pan African Film Festival, which qualifies the film for Oscar 2021 consideration.

KAT MANNE from WeekendSpecial sat down with the writer and director, Luke Bradford (pictured left), to find out what went into filming such a difficult story.

WS: White Gold was inspired by real accounts. Where were you when you learnt about the persecution of African people with albinism?

LB: I was in Tanzania, filming a missionary couple who had set up a sustainable farm to benefit local Tanzanians and an outreach programme for people with albinism. Whilst I was making a film about this farm, the work with the albinism community was part of that film. What really hit me was an encounter with a girl called Florence who had lost both her arms in an attack from a witch doctor. That encounter stayed with me and felt like something I couldn’t turn my back on.

WS: When did you decide to write about it?

LB: I didn’t immediately think: “I want to turn this into a narrative drama.” All I came away with was this feeling of injustice and a sense of what I could do. Well, I’m a filmmaker and films can play a very powerful role in getting people’s attention. And that’s what I try to do with all of my work wherever possible. To create stories that get people thinking and ultimately try and stimulate some positive change.

Some time went by but then I saw the opportunity from the Pitch Film Fund. I’d heard a sermon in Tanzania and there was one particular line from Job 30 that resonated with the experience I’d had out there and so those two things combined led me to writing White Gold and pitching it to them and then ultimately winning the film fund.

WS: Did you set it in South Africa?

LB: Well, we filmed it in South Africa but it’s actually set “somewhere” in Africa and there are reasons behind that.

WS: When Refilwe Modiselle was cast as the lead, what set her apart for the role?

LB: When I was pitching this film, one of the main concerns was how are we going to find the people to do this film justice because it’s going to be a very tiny pool of people that we can draw on and we need world-class actors to be able to pull this off. That was always going to be a challenge. So any tapes that I received, I was so grateful for, I was just so pleased and everyone did a fantastic job; but Refilwe’s audition was … she just completely nailed it. Instantly, as I was watching it, I knew that we had found the character Mansa.

It’s always nerve-wracking for the director. Will that performance happen on the day? There are so many pressures, you know. We had very little time to rehearse, the prosthetic that she’s wearing was a great hindrance to her movements, so there were all these concerns but her performance only grew. She grew in confidence in each scene, almost. It was fantastic.

WS: How did you develop the Natron’s character?

LB: I did a lot of research behind that character and what I found through this research is that essentially, it’s business. And to them people with albinism are a commodity. There seems to be this disconnect between acknowledging a human being and their desire for making a profit. It is disguised within a belief system of witchcraft and I appreciate and I understand that there are different cultures and different beliefs and all sorts of different gods, I respect that, but what this comes down to is profiting from people’s misery.

In a similar way that there might be drug lords, for instance, who can talk very calmly about a commodity that they are shifting, in the same way, after researching interviews with witch doctors I noticed that they seemed to talk in a very matter-of-fact way. I tried to capture that in the character’s nature.

WS: It seems that you’re working on a feature on the same topic.

LB: I’m working with a writer. What a feature film will offer is greater on-screen time to explore some of the interesting things that came up. This short, White Gold, opens up so many avenues to explore in terms of character, narrative, direction, topics that we can really delve into that people seem to be really interested in once we’re putting this in front of them. So the feature allows us to expand on those things. It’s also a wider audience because feature films have bigger opportunities. That is why we want to make the feature film because this subject is so important, we’re trying to get this subject in front of as many eyes as possible. So if we can tell this story on a bigger scale, on a bigger screen, to bigger audiences, that is what this community deserve.

Notably, the same film fund that Luke Bradford won in the UK is also available in South Africa. Although the competition did not run in 2020, you can keep your eye on possible offerings in 2021 via the link below:

Show your support for the albinism community: