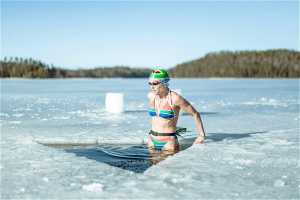 An icy lake in Finland is set to be the stage for South African free diver Amber Fillary, who will make a daring attempt to beat a Guinness World Record – all to raise awareness for the plight of those suffering from mental illness.

Amber Fillary, who has already broken a number of national records for static and dynamic free diving, is on her way to Finland to shatter the world record for free diving under ice. The current record holder, Johanna Nordblat, set the world record in March 2015, diving 50 metres under the ice in 2 °C water while only wearing a swimsuit, mask and cap.

Two years ago, while Fillary was putting plans into motion to attempt the current world record, Nordblat challenged Fillary to a swim off. Unfortunately, Fillary was unable to accept the challenge at the time as she was suffering from serious depression.

“I eventually went to see a psychiatrist who prescribed medication that helped me to better cope with the illness. Once I was back on my feet, I decided to accept Johanna’s challenge and set the date for 21 March 2019.” 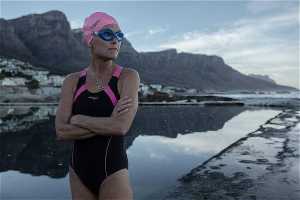 Amber Fillary: “Excited at the opportunity”

Her first step when planning the attempt was finding a sponsor, and upon hearing about a Cipla mental health campaign she immediately got in touch. Wouter Lombard, Cipla’s Associate Director: Marketing in the Central Nervous System portfolio, says that as part of the organisation’s work to help destigmatise mental health in South Africa and to raise awareness for those suffering from the disease, Cipla jumped at the opportunity to support Fillary in her world record attempt.

Fillary says that she is extremely excited for the opportunity to challenge herself in this way, but more than that, she really wants her participation in the challenge to inspire those struggling with depression, addiction and other mental health issues. “No one has to be a victim, there is hope and help out there,” she says.

This message is one that resonates deeply with Fillary, having dealt with depression and addiction for many years.

Amber explains that the reason why she loves diving so much is because it is a meditative experience that helps to calm her mind. “Free diving requires you to be in a calm state of mind, because the moment you become tense, you lose your ability to stay underwater for long periods,” she says. 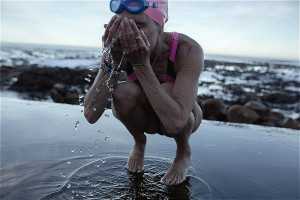 “Even the biggest challenges can be overcome”

She adds that her experience as a free diver has taught her a lot about her own plight with depression. “Depression robs you of your confidence and makes every task you attempt seem overwhelming. Doing something extreme like free diving really showed me that we are capable of achieving anything. I have learned that the human body is able to achieve so much more than imagined if we can overcome our fears and mental barriers. I am attempting this world record in conditions that seem daunting even for the most strong-willed of people because I want to prove to everyone struggling with mental illness that even the biggest challenges can be overcome.”

Amber Fillary has a record for holding her breath underwater for six minutes, and she aims to break the 50m diving under ice record on 21 March 2019. “I am under no illusion that this is not going to be easy. In South Africa I managed to swim underwater for up to 135m without taking a breath, but in near-freezing temperatures your muscles are slower, so swimming is much more challenging as you use more oxygen. Still, I feel ready and whatever happens on the day, I want to show the world that no one has to let depression keep them from living their lives,” she concludes.