Robert Moody is living the dream, as the conductor comes to South Africa for the first time to work with local orchestras, says PETA STEWART: 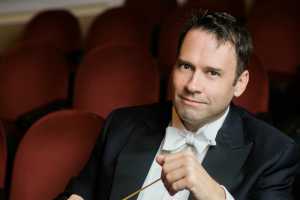 In a world of chaos and noise, it’s wonderful to hear about dreams coming true, and for American conductor Robert Moody coming to South Africa and Cape Town to conduct the CPO is!  Moody will open the Cape Town Philharmonic Orchestras’ Winter Symphony season on 6 June 2019  at the City Hall.  He’ll conduct Tchaikovsky’s Fourth Symphony as well as Dvorak’s My Homeland, and with the CPO will accompany pianist Bryan Wallick in the Barber Piano Concerto.

Robert Moody says, “I was first enamoured of South Africa when I read The Power of One by Bryce Courtenay, when I was a teenager.   Now I am visiting and have the chance to work in three great cities of South Africa, and then I get to go on safari for a week!  I can’t wait to meet fellow musicians, and see incredible nature and wildlife.  And I am sure I will spend some time in the Stellenbosch region!”  Moody will also conduct the Johannesburg Philharmonic Orchestra on 12 and 13 June 2019 and the KwaZulu-Natal Philharmonic Orchestra on 20 June 2019.

He is also looking forward to working with Bryan Wallick again.

“Bryan and I are dear friends and colleagues, and we’ve worked together numerous times in Maine, North Carolina, and Arizona in the U.S.  Next year he will play Grieg with me at my Memphis Symphony Orchestra.”

Moody is Music Director of the Memphis orchestra as well as the Arizona Musicfest, which boasts one of the festival orchestras in North America, drawing from some of the top orchestras in the world — Vienna and New York Philharmonic, Philadelphia and Cleveland orchestras and also the Metropolitan Opera Orchestra.  He was until last year Music Director for the Portland Symphony in Maine, and the Winston-Salem Symphony in North Carolina, leaving them after nine and 11 years respectively.

Moody doesn’t come from a musical family so there was no classical music in the house growing up. But when he was about 10, a music teacher came to his class at school to demonstrate string instruments.  Moody didn’t sign up, but a week later when the teacher came back to the class, his name was on that list, entered as a joke by his girlfriend who didn’t know what a favour she was doing him!

Moody went on to study voice and cello at a high school for the arts.

“My voice teacher continually told me that I could make a career as a singer if I spent less time practicing cello. And my cello teacher said the exact opposite. So that was my dilemma.  Then when I was 15 I heard Solti and the Chicago Symphony and knew that’s what I wanted to do. I won a conducting competition at a music festival the next summer, and I’ve been hooked ever since,” says Moody.

Part of that hook is that music inspires him.

A physiological response to music

“I really just wanted to be inspired,” he says. “I recently read that crying at a work of utter beauty is actually a physiological response.  For me it really is. At the age of 15 I got to see/hear the Chicago Symphony play Mahler 1 with Solti conducting.  At the finale, I realised I was crying.  I had never heard such incredibly powerful music before.  The inspiration, for me, sometimes comes from being on top of a beautiful mountain snow skiing (my passion), or finishing a half-marathon (I’m also a runner).  But most often it comes from music.”

The main work on Moody’s CPO programme, the 4th Symphony by Tchaikovsky,  is “one of the most exhilarating symphonies one will ever hear in live performance. Tchaikovsky is such an interesting figure in the history of music.  So completely celebrated in his own lifetime (not true for many composers), and yet so filled with inner turmoil.  Because of his own sexual identity (which in the 19th century was an immense burden), his 4th symphony seems to have a duality.  It is overwhelmingly romantic, and in the end unstoppable in happiness.  But the happiness seems almost too driven. As though he’s working overtime to make sure the world knows of his happiness.”

For Moody, success is more about what one has achieved in terms of having a positive impact on others than on the positions he has held.

“I’m prouder of the impact we make on lives in the cities where I’ve served long term as music director. More people are interested in live orchestral music, more kids play instruments, more souls have been touched by the power of music, because we worked so hard in Winston-Salem, Portland,  and now Memphis.  That is a satisfying feeling,” he says.

After his safari, Moody will be return to the US for a gala concert with the legendary soprano, Jessye Norman and some performances of Aida, the first time he will conducting it.