At Robin van Wyk’s three-act Coppelia premier, it took only the first (recorded) bars from Delibes 1870 delightfully mysterious score for me to flashback to 1950 when, in my early teens, I danced as one of Swanilda’s six friends in Dulcie Howes’ Coppelia (Act 2) production. That performance, by the UCT Ballet Company, took place at Wits’ University’s Little Theatre with Professor Percival Kirby conducting his Wits Music Student Orchestra.

It also happened to be the occasion when Eleanor Laubscher (Pierrot Doll) succumbed to Johannesburg’s altitude and fell in a dead faint onto John Dronsfield’s (fold-up) aluminium flat. And while still unconscious Pamela Chrimes somehow dragged Eleanor off stage – although not before the flat, tumbled onto poor June Hattersley who, as Astrologer Doll, stoically remained peering through her Nelson’s eye telescope.

Now, why should I mention this ‘disaster’ in relation to Sizodanisa Production’s Coppelia? Fortunately, no such disaster befell Van Wyk’s Pierrot (Cleto van Rooi), and Lauren Wootton gave as equally a polished Swanilda interpretation as Muriel did. In fact, she coped rather better with mime gestures, difficult hops en pointe sequences and the second act’s ‘mirror’ arabesque penche… she’s a really pleasing young dancer to watch.

The connection was remembering that, with one or two exceptions, UCT Ballet Company comprised talented, enthusiastic young ballet students who, by always giving their best, were unknowingly laying foundations for CAPAB’s 1964  professional ballet company.

So, my thinking was, this nucleus of equally young dancers – who somehow continued training during these past wearisome months – should now aim towards forming a professional Youth Ballet presenting a repertoire formed from trimmed classical ballets comique.

But first serious attention to foot work is important. The feet are where training begins. Oh yes! Port de bras is perhaps where viewers focus. As are legs above ears. But technical growth starts with properly placed and used feet. 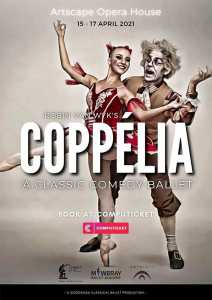 Had the cast watched guest artist Conrad Nusser’s Franz solo they’d have observed how easily he performs double tours en l’air, multiple pirouettes and cuts high through the air in steps of grande elevation. He achieves that because his teachers wouldn’t accept untidy footwork from his very first lesson.

Setting Coppelia against borrowed village sets, Van Wyk very sensibly married traditional Coppelia choreography with his own. Thus he succeeded in trimming the ballet down to 90 minutes (Covid regulations) without losing the essence of the tale of  Dr Coppelius (Johnny Bovang) the mysterious doll maker from ETA Hoffmann’s Der Sandmann.

Where to next Sizodanisa? Keep us all informed.