A silver lining had never been clearer for the musicians of the Cape Town Philharmonic Orchestra when they took their bows at the end of their performances at Erin Hall in October and the spontaneous applause began, says PETA STEWART: 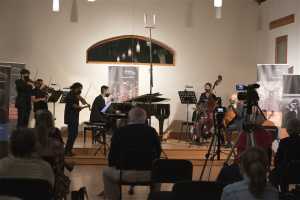 Smiles and bigger smiles glowed as they revelled in the warmth that only a live concert can bring.  Four chamber music concerts, all recorded at Erin Hall in front of a small masked and socially distanced audience of 30, may be over, but they will be streamed on four consecutive Thursdays from November 5.

It was the first time in seven months that the musicians had performed for an audience. Most had performed in the Virtual National Arts Festival and the digital Klein Karoo Klassique festival, some had done private gigs. All had also been involved in mentoring the young musicians of the Cape Town Philharmonic Youth Orchestra (CPYO) and the Cape Town Philharmonic Youth Wind Ensemble (CPYWE). All were on salary, partially reduced at this time, but all are first and foremost performers who love being in the public eye.

Symphony concerts had been on ice from March; gatherings prohibited but, says the CPO’s principal guest conductor, “no other art form comes from so deep inside a human psyche and can go that deep into a human psyche than music.” It has always been necessary and especially during the pandemic, to let music uplift people, even though the arts are along with tourism the industry that has suffered the most with no government support and income lost.

Five videos had been made by the orchestra and one each by the CPYO and CPYWE, all shot on cell phones in their own homes.  Still no audience.   The response from supporters had been amazing … many made over the costs of their tickets for not one but two seasons; others came in with large and small donations and the orchestra needed to show them that they mattered.

It was becoming clear that the regulations would soon allow for small concert gatherings and the only way to get around this, to serve the audience, the sponsors and the musicians themselves, says CEO Louis Heyneman, was to give them music.  So a series of hybrid concerts was planned with the focus on performing works that were linked to symphonic repertoire.  Principal cello Peter Martens, perhaps the most experienced chamber musician amongst the musicians, was roped in and soon he had four programmes designed. 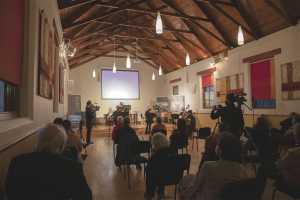 There’s no doubt from the comments made at the concerts that the choice was inspired.  From Mozart’s Clarinet Concerto arranged for string quintet and solo clarinet (played by the brilliant Stellenbosch student Ferrol-Jon Davids) to two concertos by Beethoven which were arranged for piano and string quintet. No 2, written before No 1, was performed by Qden Blaauw; No 1 by Mike Wang.   Another interesting addition was the Elgar Cello Concerto which was arranged by a young British composer in the times of Covid-19 for solo cello and string quintet.  Elgar would have been pleased! Also on the programme were arrangements of symphonies by Mozart and Beethoven and the overture to The Magic Flute, for brass. The only works not arranged from full symphonic works were the brilliant and seldom heard here Brahms Piano Quartet No 1 and the Shostakovich Chamber Symphony, which had been arranged for timpani and string ensemble.

While the piano, cello and clarinet parts were exactly as written for the concertos, the string players, so used to the beloved repertoire in the original, had to fill in the flutes, oboes and any other instrument the composer had used. That demanded constant attention and concentration.   While some of the musicians were used to leading an ensemble, for others, used to playing in pairs at one desk, standing alone was stressful but it all worked and the four concerts were a great success.

What’s next for the country’s normally busiest orchestra is the streaming of a community gala, the recording in November for later streaming of two symphony concerts with Bernhard Gueller and pianists Nina Schumann (Rachmaninov Piano Concerto No. 2) and Albie van Schalkwyk and François du Toit (Mozart Double Piano Concerto), both at Artscape and hopefully two symphony concerts in January over weekends at the City Hall which is undergoing renovation until April.

See the full programme of Symphonic Masterpieces in Miniature here

What: Symphonic Masterpieces in Miniature hosted by Rodney Trudgeon, sponsored by City of Cape Town
When: 5, 12, 19, 26 November 2020 online for four days each
Tickets: R100 per concert; R320 for all four. Book https://www.quicket.co.za/events/117345-online-streaming-ticketing-symphonic-masterpieces-in-miniature-?preview=t#/tickets
Info: shirley@cpo.org.za
WS