It was the Queen of Storytelling, Gcina Mhlophe (picured below) who stole the stage and several hearts at the first Focus Day on Thursday at the ASSITEJ Cradle of Creativity Theatre for Children festival. 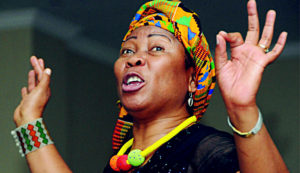 “Storytelling is not a job, it’s a calling” and “Let the story travel where you cannot go” were the words of encouragement offered to the captivated audience in the room. Orek Omondi, based in Nairobi, reinforced the power of storytelling as a rite of passage within east Africa and highlighted the many ways in which African storytelling contributes to society  – interpreting the universe, resolving natural and physical phenomena, teaching morals and maintaining cultural values.

Similar themes were echoed by Mohammed Aghebati from Maaa Theatre in Tehran Iran, who shared his experience of traditional Iranian story-telling forms, Pardeh-dari and Pardeh-khaan. These forms use large canvasses (pardeh) hung in a square on the walls of a tea or a coffee house. This combination of visual art and theatre is an entrenched part of Iranian culture and hearing the similarities between the different forms from  across the globe really emphasised the universality of the medium.

The focus of Friday’s session was Theatre as Education with Terri Elliott, from UCT, seeking to answer whether or not the arts, specifically drama, are even possible in a South African education system which faces a curriculum in crisis and where 83 % of schools are regarded as dysfunctional. The Kickstarter Arts project, an educational teacher empowerment programmes, is one way in which arts education has been introduced to many schools recently. Alison Green, based at ASSITEJ in Johannesburg addressed the challenges and triumphs of the programme which has been piloted in 20 schools. Selloane Mokuku from ShakeXpereince in Johannesburg presented the concept of integrating arts-based activities into mathematics lessons where “learners are brought to mathematics “rather than “mathematics being brought to learners”. The innovative and exciting approach would seem to be an obvious answer to one of the biggest dilemmas faced by so many educators. 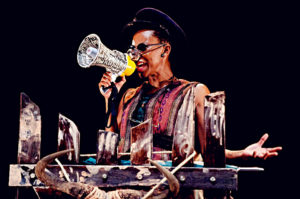 Away from the conference platform and on the stage, Animal Farm (pictured left) has been one of the productions that has had people mesmerized. This is art as education in action. No surprise considering it is produced by ShakXperience, the innovative company behind so many initiatives engaging with young people with cultural education that invigorates and transforms. Neil Coppen’s technical and design wizardry creates a world on stage that provides a frighteningly beautiful backdrop for some of the best performances you will see in South Africa. The sight of young black women parading with power on stage will stir a sense of revolution in even the most rational of beings.

So many wonderful events

Puppets are proving to be quite a hit as well. The animated crockery in the delicate A Mano has held wide-eyed children spellbound. In Red Earth Revisited the young Nongqawuse is joined on stage by a migratory stork, watching the story unfold from above. With some of the country’s foremost puppeteers manipulating these beautiful objects, the story gains another dimension and as history unfolded before my eyes I wished that every history lesson was presented to children this way.

The exhibition 21 – Memories of Growing Up opened at the District Six Homecoming Centre and is open to the public daily.

The video installation is a collaboration between Mats Staub, Maia Marie and Nomonde Mbusi and presents a series of video interviews where participants reflected on what happened when they turned 21. From Mrs Zirkelback who turned 21 in 1939 to Mr Simba who turned 21 in 2015 the range of experiences across generations and cities presents engaging narratives which cross boundaries and highlight our shared humanity.

The focus days move to cultural hubs from Saturday and Guga S’Thebe in Langa and the Vrygrond Centre in Vrygrond become playgrounds and classrooms for the weekend with a focus on Theatre for Healing, Theatre for Social Change and Theatre by Children for Children. Productions will be presented at both venues during the day which will highlight the themes addressed in the plenaries.

Conference and festival goers have all been delighted by Cape Town and appreciative comments about the city’s wine, food and spectacular beauty have been overhead at many a coffee break. With more than a week left of performance and play, I am hoping they have conserved their energy to enjoy the abundance that they are yet to experience.

Festival Picks of the Day 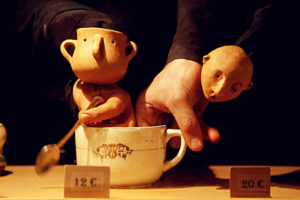 A MANO (El Patio Teatro –  Spain) at the Baxter Theatre,

This small story with a big heart tells the tale of a tiny hero who wishes to escape the confines of a pottery shop window. A potter’s wheel and four hands at play make for a mystical and moving experience. 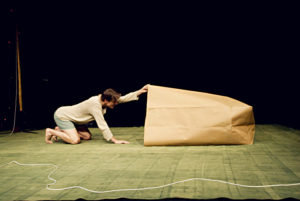 This is an ideal production for very young children who may have not yet experienced theatre, With oversized paper bags, and old record player and a washing line two people sing, dance and play invoking imagination and ensuring delight for children and adults. 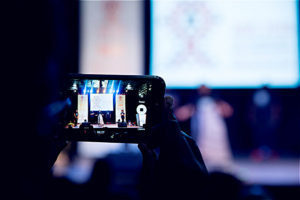 In an age where more and more of our time is spent engaging with screens rather than people, this story about love in the age of the internet where worth is measured in likes and friends are Snap-Chat avatars is enlightening and heart-wrenching. Ordinary relationships are hard work in any event. Add an unwanted Facebook Friend or a sarcastic status update, and the lives of teenagers are damaged in a very public way. A play for our time, this is one for young adults and their parents to experience together.

Where and when: ASSITEJ ‘Cradle of Creativity’ Theatre for Children festival at the City Hall, Baxter Theatre, Artscape Theatre and cultural hubs around the city until May 27