Eight or nine years after deciding they wanted to play Krommer Double Clarinet Concerto,  Daniel Prozesky and Junnan Sun are finally getting to do it! PETA STEWART finds out more: 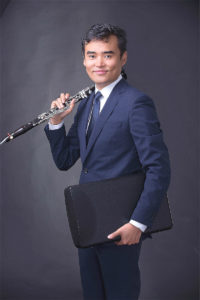 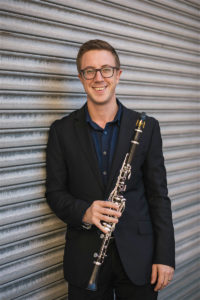 The pair will play the bright and breezy work in the second concert in the Cape Town Philharmonic Orchestra’s 13th International Summer Music Festival. The concert takes place at the Cape Town City Hall on Thursday, January 31, at 8pm, under the direction of Martin Panteleev.

According to Sun (pictured left), “the work is an absolute gem in the clarinet repertoire with lots of beautiful melodies and virtuosic passages. It is a crowd pleaser,” he adds. Prozesky (pictured right) agrees: “The Krommer is such a joyous work which bubbles with excitement and virtuosity and I can’t wait to perform it with Junnan.”

Prozesky says: “I’ve seen Junnan grow into an amazing clarinetist. He has an incredible work ethic and love for the clarinet. His dedication and musicianship comes through clearly in his playing. I know I will learn from him too. I think we have similar ideas about sound and projection too and will blend well together. ”

Sun says: “I learnt a lot from Daniel. I was a young rookie who had just started my career when we met. Daniel was already one of the most respected musicians in the university orchestra, I think the reason we respected him so much was because was doing an incredibly difficult engineering degree and still playing clarinet in top form! So good – he was much better than most people that were studying music!”

Married to music – and musicians!

The pair have something else in common: both are married to musicians.  Prozesky’s wife, Caroline, is the principal horn with the CPO. “I know it sounds cliched, but for me being a professional musician is not my job but my passion. My desire to always be on top of my game and to be continuously improving together with the demands of being principal clarinet of the CPO means that the clarinet can be rather all consuming. Caroline understands this. It’s wonderful to be able to experience and enjoy the incredible music we play together. “

Sun’s wife Mia Björkman is a violinist. “We are both sensitive and emotional people. Because our work is emotionally demanding, when we get home we really appreciate silence and space. I also absolutely love cooking and Mia is the in-house tester, the MasterChef Critic for my up and coming dishes. I recently made Chinese fried rice with boerewors and some Durban spices. It was a winner!” Let’s hope he can get those Durban spices in Johannesburg, to where they have just moved!

Prozesky, having completed that engineering degree, studied in Lausanne in Switzerland, and won the position with the CPO in 2015. He was recently appointed clarinet teacher at the Conservatoire at the University of Stellenbosch, and is “really looking forward to nurturing the next generation of South African clarinetists.” He’s also looking forward the rest of the CPO concerts both now and in the following season, as well as to some chamber music. He is part of the CPO Wind Quintet which made its debut last November, and also played the Mozart Clarinet Concerto with the CPO on a wine farm in Tulbach, followed by a very well received recital with Francois du Toit for the Richard Wagner Society.

“I’m always striving to become a better musician and I don’t think this drive will ever go away,” he says. “I would love to perform more concerti in the future and perform more widely throughout SA and the world.”

Sun, who numbers performing at the Royal Albert Hall, playing chamber music with his friends and watching Game of Thrones as some of his high points, is coming back to Cape Town mid-year to give another recital for the Cape Town Concert Series, this time with Megan Geoffrey Prins on May 25 at 7.30pm. Before that he is joining both the JPO and KZNPO for their new concert seasons, and will give a recital on March 3 in the Miriam Makeba Concert Hall at UNISA.

“Being a musician is a never ending road; if you stop practicing and reaching for the absolute beauty this profession could become very depressing and un-motivating. My biggest goal is to make classical or instrumental music appeal to as many people as possible. I really want to break the stereotype of classical music that is boring and a thing of the past to something that is fresh, fun and easily accessible to the modern world,” says Sun.

He left his position as principal clarinettist in the KZNPO in December because “ I want to spend more time with my family in Johannesburg and China. I have been very lucky to be part of a fantastic orchestra for the last four years, with lots of exciting projects and also learning from top conductors and soloists around the world. I will treasure this experience for the rest of my life. “

While this is their first collaboration as soloists, they both hope it won’t be the last!