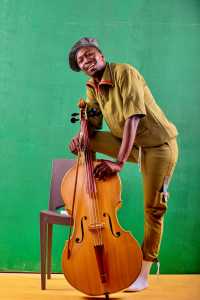 South African composer and cellist Dr Thokozani Mhlambi (pictured left) kicks off a homecoming tour in Cape Town in September – presenting new material created in Paris as well as some of the favourites from his debut album.

After performing in France over the past two years, the 35-year-old KwaZulu-Natal composer and cultural thinker is set to perform at the Baxter Theatre on 18 September 2021, in the Baxter Garden, with his Homecoming Tour concert.

“I’m really excited because the Baxter Theatre has established a garden venue, which is in keeping with the times, in terms of health protocols. Performing in an outdoor setting puts in place a different kind of communication with your audience than a traditional theatre venue,” says Mhlambi.

The concert takes as an inspiration Heritage Month. It will open with a solemn dedication to early African composers (Enoch Sontonga and John Knox Bokwe, to mention a few), and culminate with a meditative set which will reflect the influences Mhlambi came across in France –  including traces of Arab influences from interacting with Oud players on the streets of Paris, and some Kora-sounding reflections drawn from roaming musical griots from Mali.

“Heritage Month is an important time for bringing people together. The global pandemic has really redefined our own understanding of togetherness. Music, however continues to play an important role in promoting diversity of languages (especially African languages) and lifestyles,” explains Mhlambi.

He continues: “This concert will be unique in terms of the diversity of energies it brings together, some coming from my global travels, others which are brought by the various contributors. I like the fact that audiences in Cape Town are very open-minded, they don’t come with the expectation of seeing the same old thing.”

Where and when: Baxter Theatre, garden venue on 18 September 2021