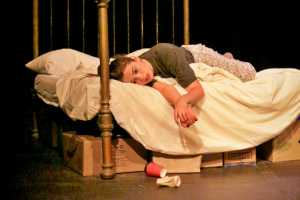 What an absolute delight – Earworm, currently on at Theatre Arts, is a strange, fresh, whimsical, absurd, and completely hilarious piece of theatre and it reminds me of what I was trying to do and say when I had just left drama school. It is liberating and original and engaging and ridiculous and I loved it.

So, girl cannot sleep. She tosses and turns in an all too familiar way (me last night but with less agility) on a four-poster bed. She is waiting for a reply to her WhatsApp, she is anxious and insecure about the next day, she scrolls, and breathes and gives herself pep talks, and then gives herself earworm! I suffer from earworm. I now have the earworm. That same earworm. There’s a mosquito, and then there is a big surprise – a most hilarious, strange, delicious, ridiculous, and funny surprise. I won’t spoil it, but the surprise also has the best front hair fringe thing going on. 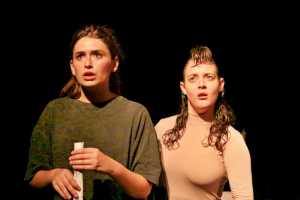 Theatre Arts is bringing it. This play feels like the perfect type of production to get people back into a live set up. I laughed, related, and connected. If you are in Cape Town over the long weekend, it really is worth going.

Of course, I can’t help myself. Next week my own Clouds Like Waves opens there too, also for its second short run, so if you didn’t see it the last time, now’s your chance.

When and where: Theatre Arts in Observatory until 17 April 2022