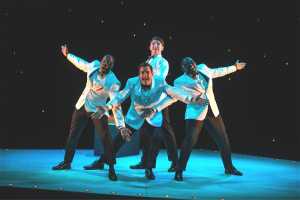 “Two shows in one” summarises this musical comedy: even the title has a certain duality, as depending on how one pronounces “plaid”, it could be a pun describing the repertoire (“forever played”, therefore evergreen music) or simply referencing the resilience of traditional Scottish attire.

The pre-interval part of the show is low-key, unassertive, and soft and sweet as a pink marshmallow. This blandness contrasts sharply with the unconventional opening as the quartet of singers make their entry intoning a solemn introit in Latin, and we realise that they are long dead, killed in a car accident in 1964.

Now they have the opportunity to return to earth more than half a century later and exhibit their vocal prowess to a 21st century audience. This original concept, combined with a striking set that has a starry universe as a backdrop and a pentagonal performance area imaginatively lit, raises expectations of something more dynamic than what is presented initially.

Vibrancy, spiked with a little fun

Post-interval ushers in a radical change as the style, execution and general demeanour of the cast assumes vibrancy, spiced with a little fun. The advantage of such diverse presentation is that it offers something for everyone, from sentimentalists reliving past memories of life in the 1950s, to those whose taste inclines rather towards ebullience and catchy hits delivered with zest. 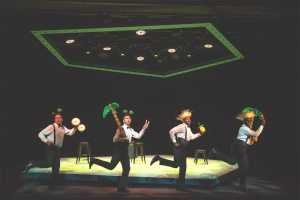 What the two parts of Forever Plaid have in common is an artistic integrity discernible in the highly polished vocals from the quartet. Billed as a harmony group, that is exactly what they muster, not only superb unison singing, but also well-honed ensemble in their collective movement. Although they function near-flawlessly as a group, each is neatly differentiated from the others with a distinctive personality. Another plus is their mastery of American accent, maintained unwaveringly throughout the performance.

No ‘fifties show would complete without reference to Perry Como, generously showcased in the second act; contrasts abound to give added texture to the repertoire, from somnolent Calypso to steely energy in Working on the Chain Gang. Before focusing on plaid costumes (a preoccupation with these lovers of Caledonia), there are gestures to Hispanic fire (Lady of Spain) and elements of cirque entertainment complete with juggling, then comes the finale as they don tartan and render Scotland the Brave with brio.

This is a gentle, cheery evening combining nostalgia, sentiment, fun and – best of all – superlative ensemble. 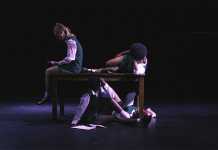 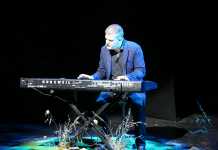 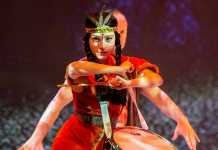