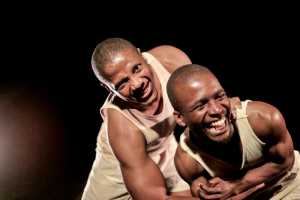 Four Fathers: Bananas for the Baboons, a brand new South African play, premieres at The Baxter Golden Arrow Studio from 3 to 20 August 2022. The play explores black fatherhood and absent fathers in the country.

With this production, emerging young writer and director, Kitso Seti, makes his debut as a director. He is a theatre-maker, musician and blogger who holds a Master’s degree in Politics from the University of Cape Town and his research is focused on how black (consciousness) theatre can be used to conscientise people and make sense of black positionality in the world.

The two-hander stars Buhle Qinga and Sivuyile Dunjwa, who take on the roles of two young boys in search of their father and their journey of discovery along the way. Set design is by Wayne Jacobs and Chris Spogter, lighting by Franky Steyn and costumes by Marisa Steenkamp, with music by Kitso Seti. 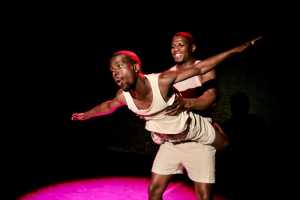 Qinga was recently seen in the award-winning play, Thank You for your Service, which he co-wrote, co-directed and performed in and which won the Best of Baxter Zabalaza Theatre Festival award in 2021. Buhle is a versatile artist who trained in dance and theatre stage practice, and he holds a certificate in Community Arts and Culture Development from the Northwest University.

Dunjwa is a graduate from New Africa Theatre Academy and Magnet Theatre and as a trainee in Magnet Theatre’s Fulltime Training and Job Creation programme he performed in productions such as Running with Goldfish, Gift-Wrapping the Sea, Heart of Redness, the award-winning Tree/Boom/Umthi and Thabo Mbeki and Other Nightmares.

Four Fathers: Bananas for the Baboons is one of two plays selected from The Baxter Masambe Playlab, where a cohort of 10 creatives attended a four-month long writing residency, which was held at The Baxter last year and which offered writers time, space, peer-to-peer mentoring and financial resources to create new work. It forms part of The Baxter’s Platform for Special Talent programme which is made possible by the City of Cape Town.

What: Four Fathers: Bananas for the Baboons

Where and when: The Baxter Golden Arrow Studio from 3 to 20 August 2022