Frogman at the National Arts Festival illuminated the possibilities that virtual reality technology could grant audiences in the future, reports OLEANDER CAIRNS: 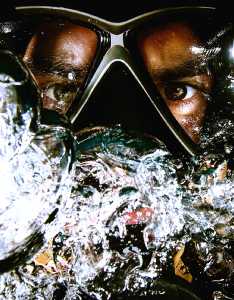 Frogman revolves around the mystery of Ashleigh Richardson, a young girl who went missing along an Australian coastline in the nineties. Directed by Jack Lowe, the play explores a current reinvestigation of the fictional case. The work investigates what really happened and shows how a disappearance of this kind affects the communities left in its wake.

Annabel Betts, who played Ashleigh’s best friend, Meera, was the single live actor, and managed to maintain the audience’s attention admirably. The production is notable not so much for its plot as for its methods of plotting: a large part of the story was told via a Virtual Reality (VR) headset and a pair of headphones, which each theatre-goer donned and removed according to prompts on screens in front of their chairs. There was also extensive use of voiceovers during the “live” parts of the show.

The stage set-up was simple: a rectangle in the centre of the room with two chairs. The first chair was occupied by Meera, when she wasn’t pacing up and down, while the other held the accoutrements of the detective interrogating her, who was present through voiceover alone. This was an effective way of navigating the difficult theatre space, which had chairs right the way round.

The actor moved from one side of the stage to another so that no one part of the audience had a permanent view of her back. The seats were on stalks, which allowed a degree of mobility necessary to see all of the virtual world contained in the headset. This world, Meera’s bedroom, seemed to have been created by stitching together various pieces of video footage, which, while rather grainy, was nevertheless astonishing because of its novelty. As you tilted your head up, you could see up to the top of the bunk bed, and as you twisted around, you could examine the TV set or the aquarium.

I am always suspicious of visual storytelling that is underpinned by almost incessant mood music, as sometimes this serves to prop up a weak script. I think this was one of those times, and I didn’t feel particularly invested in the story. It addressed the relationships between children well, examined what children can (and sometimes need to) believe, and captured a certain kind of middle-class, nineties childhood that involved sleepovers and DVDs, but I found the execution sentimental. I found the underwater scenes most compelling, and I wonder how much of the plot was an excuse to immerse the viewers in virtual submarine environments. The VR seemed particularly suited to portraying this: the similarity between diving masks and the VR headset seems unlikely to be coincidental. 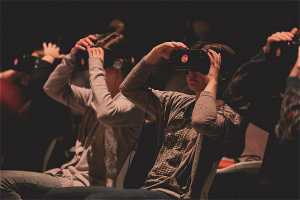 Using the headset was interesting, but also sometimes unsettling: for example, when one turned right around during the diving sections of the show, one was confronted with the image of a diver, which created the weird feeling that one was in the diver’s arms, or somehow on his lap. Moreover, there was an explanation at the beginning of the show that the VR would not go on for more than eight minutes or so, to avoid tiring out one’s eyes, so if VR becomes more common, the curators will have to reckon with the human body’s limits, as well as the limits of the technology.

The VR itself was not particularly sophisticated as it only involved a headset, and no hand-held motion controllers, for example. However, Frogman did illuminate the possibilities this technology could grant audiences in the future. Who knows what other, better plotted worlds await.

What: Frogman at the National Arts Festival