The South African premiere of Happy New Year, adapted from the award-winning play Midsummer (A Play With Songs) will open at the Fugard. 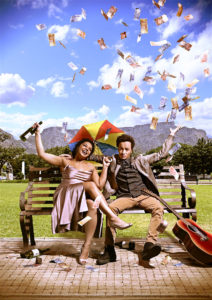 The hilarious, heart-warming rom com has been adapted by South African icon David Kramer from the play by David Greig and Gordon McIntyre, and will run from 19 February 2019 in The Fugard Studio Theatre.

Whilst at The Tricycle Theatre, Nicolas Kent brought David Kramer’s Kat and the Kings and three more of his shows to London and recently Kent suggested this play would make a happy South African adaptation, thus the collaboration.

High flying divorce lawyer Lee-André meets car salesman and small-time criminal Dan in a bar one midsummer’s night when the married man she’s been seeing cancels their date. She’s out of Dan’s league, he’s totally not her type, but when these two disparate souls come together, a wild weekend of alcohol-infused adventure and abandon ensues. Between bridge-burning, car chases, wedding bust ups and self-loathing hangovers, they discover they are not so different after all, and that maybe there are second chances at life – and love.

The original production of Midsummer (A Play With Songs) won the Carol Tambor Best of Edinburgh Award at the Edinburgh Festival Fringe,  and garnered praise such as, ‘an exhilarating theatrical journey… you float out laughing as if you’ve just swallowed sunshine on a spoon’ (The Guardian), ‘theatrical ingenuity’ (The New York Times), ‘riotously funny as it is touchingly romantic’ (Variety), ‘a joyous romp’  (The Independent) and ‘beautifully written, combining sharp dialogue with evocative description and passages’ (The Telegraph).

Where and when: Fugard Theatre from 19 February 2019