How fabulous it is to see fresh, feisty comedy in Cape Town; comedy that’s pertinent, personal and political in terms of content, and delightful when it comes to delivery.

I’m talking here about Lindy Johnson, who is currently opening for Nik Rabinowitz’s Dry White show at the Baxter. What a spot-on slot she took. 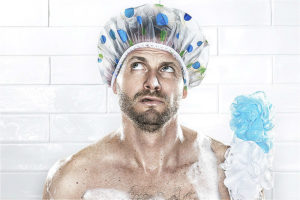 Unfortunately, I can’t say the same for the rest of the evening. Rabinowitz’s take on just about everything from gender identity to the genesis of the word koeksister revealed a startlingly staid approach, one which relied heavily on a rather old school sense of humour. I could say conservative, even. His commentary reminded me a bit of a character that fellow comedian Mark Banks once created, a cantankerous old man who sat in his armchair and complained. You know, that “What is the world coming too?” kind of stuff. It was a bit like hearing my 81-year-old father express surprise that the gays can now get married.

Which is all a bit ironic, really, because Rabinowitz claims to be hyper-aware of his privileged position as a white heterosexual male, and professes a determination to try and be different. But taking cheap shots at the trans community wasn’t a good way to start. And boxing people into accent-defined stereotypes wasn’t a good way to continue.  Are there any coloured people who don’t speak an exaggerated Cape dialect in Rabinowitz’s world?

The material, as it unwound, kept hovering around the mundane range of the meter – making fun of hippies during the recent drought, mocking Afrikaans people who say “f” instead of “th”, trundling out Patricia de Lille, pondering celebrity hall passes – with a certain mean, smug edge to the laughs. It’s comedy as “othering” – and it’s what many white heterosexual males tend to do best.

Look, I’m not totally convinced that only Sarah Silverman can make Holocaust jokes and only Donald Glover can do race riffs or only Caitlyn Jenner can tell us how hard it is to find big girl’s panties. I think if you have empathy, it goes a long way to creating clever, funny material that of course can be controversial, but doesn’t cast you as an asshole at the same time. Anybody is allowed do this. And all topics are open game. But it takes skill. And savvy writers know this. If you’re going to march out into contentious territory, maybe check your ego at the door.

So what has Rabinowitz got to work with? Yes, yes, we know all about the Waldorf upbringing and the Eagle’s Nest eyrie and the fact that he can speak Xhosa. Is it enough to base yet another show on? I’m not sure, but maybe it’s time for Rabinowitz to claim where he is now – being that CIS-gendered privileged guy – and turn up the dial. God knows there’s enough to laugh at about being in this position – if you choose to interrogate it properly, instead of using it as a pedestal to judge others.

Somewhere near the start of the show, Rabinowitz spoke in somewhat aggrieved terms about a reviewer who had challenged his woke status. (His response? “I got a whole team of black, lesbian, disabled etc etc people to help me write this new script.” OMG – I could just hear my aged parent chortling along).

But the comedian would do well to take heed. There’s nothing woke about Dry White. If you want to play in that league, you need to look at yourself before lashing out at others. That’s Woke 101. Or before you know it, you end up being a Mark Banks caricature on a couch …

I’ve always looked forward to a Nik Rabinowitz show – he’s smart, his timing is great, his facial expressions are cute. But this time, it felt more like an ordeal. I hope it’s not so, the next outing.